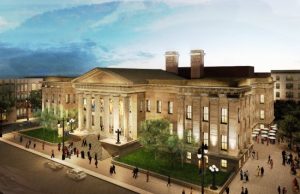 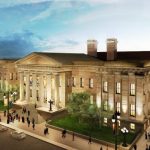 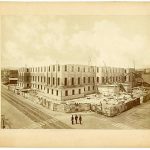 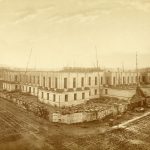 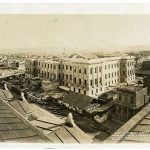 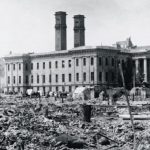 The Mint was constructed between 1869 and 1874 and immediately proved to be an important hub and resource for the community, which frequented the building to turn gold into coins. The newspapers at this time highlighted two of Alfred Bult Mullett’s original program design objectives: design and build a structure that was both “Fire Proof” and “Earthquake Proof”. The Mint was put to the test in the 1906 San Francisco earthquake. The system of seismic resistant elements and anchorage details that were installed as part of the original construction contributed to the relatively little damage the building sustained during the earthquake. Also, despite being in the “heart” of the fires that ensued after the quake, the workers were able to extinguish the limited fires in the Refinery area and on the roof. In the aftermath, people flocked to the Mint as a safe-haven in a sea of debris and because of the drinking water from the artesian well. For weeks, many camped out front of the building, entrusting its seismic performance.

The Old San Francisco Mint is a three-story brick masonry and stone-clad bearing and shear wall structure that measures approximately 220.5 feet in the north-south direction by 165 feet in the east-west direction. There is a courtyard in the center that measures about 102.5 feet north-south by 43 feet east-west. The building sits on a massive mat-type foundation of unreinforced concrete that is approximately 4 to 4.5 feet thick below the basement level. The average building height from ground level to the roof is 52.5 feet. The first and second floors are constructed of wrought iron beams supported on the masonry walls and cast-iron columns. The floors consist of shallow brick arches with a concrete rubble fill on top spanning between the beams. The floors are typically finished with stone pavers or hardwood floor. The attic floor system is made of shallow, corrugate iron arches with a concrete rubble fill on top. The roof framing includes wrought iron beams and trusses with stacked timber joists and straight timber sheathing, creating the roof diaphragm.