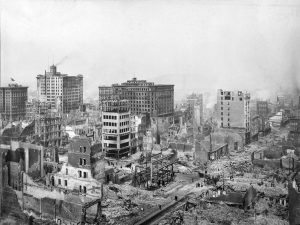 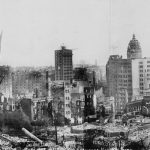 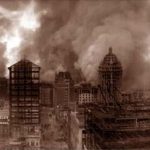 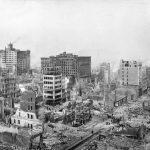 The 1906 San Francisco earthquake and resulting fire was a devastating event that resulted in the loss of about 3,000 lives and destroyed about 80% of the city of San Francisco. The estimated 7.8 magnitude earthquake resulted in over 26 miles of surface rupture and is still one of the deadliest natural disasters in the history of the United States.

The location of the epicenter has been debated as it predates modern technology and thus was not recorded at the time. The most recent report by United States Geological Survey (USGS) suggests the epicenter was located near Mussel Rock off the coast of Daly City.

On April 18, 2006, the 100th Anniversary Earthquake Conference was a multi-day event held in downtown San Francisco to both commemorate the 1906 earthquake and assess the effect the earthquake had on the structural engineering profession. Presenters spoke on the topics of commemoration, learning from the past, assessing the present, and preparing for the future.

Rebuilding San Francisco after the earthquake became an instant priority and financial assistance from banking institutions allowed the city to start the reconstruction process very quickly. The main street grid was preserved, but significant urban planning alterations were undertaken to make the city what it is today; notably, the current neoclassical civic center complex, Coit Tower which was constructed as a monument to the people of San Francisco, and a subway to run under Market Street.

Surprisingly, the the 1906 earthquake did not result in any major changes to the building code, however, it did spawn the first comprehensive national scientific investigation on earthquakes and spurred a rigorous study of the San Andreas fault itself. The report, chaired by Professor Andrew C. Lawson of the geology department at UC Berkeley, was published in 1908 and detailed damage and fault movement of the surrounding geology. The results of this report highlighted for the first time the correlation between shaking intensity and site geology identifying that soft soil sites experienced stronger shaking than nearby sites located on bedrock.

After publication of the Lawson report, it became clear that detailed and accurate observation of faults is critical to understanding earthquake damage. A series of triangulation surveys was conducted which revealed displacements resulting from the earthquake. This discovery helped form the basis of the Theory of Elastic Rebound, which describes our current understanding of earthquakes.