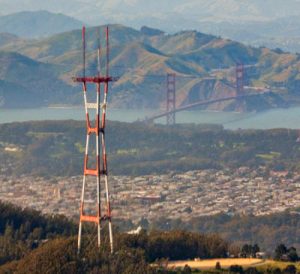 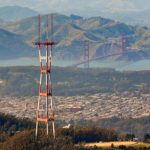 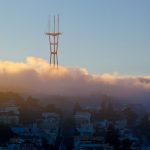 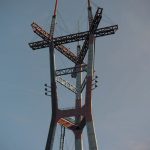 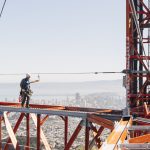 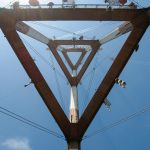 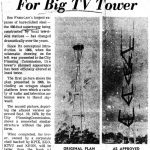 At nearly 1,000 feet, Sutro Tower was the tallest structure in San Francisco until 2017 when it was surpassed by the Salesforce Tower.  The voluntary seismic upgrade of the structure, which is located 8 kilometers from the San Andreas fault, provides a vital extension of its service life to maintain the telecommunications and emergency response needs of the city.

Sutro Tower is a telecommunications tower located in Clarendon Heights that services the City of San Francisco.  Plans for the first tower design began in 1956 and was disapproved in 1966 by the San Francisco Board of Supervisors.  Following the defeat, a final design that featured a larger and more robust structural system was planned and approved in 1970.  In 1998, additional equipment was added to the structure which resulted in an increase in wind loads which prompted a structural retrofit.  A voluntary seismic upgrade followed the retrofit, effectively increasing the service life of the iconic tower.  The 770-foot steel trussed structure is supported by three 14-foot square concrete piers over a 53-foot square and 10-foot thick concrete mat founded on bedrock and features high-strength cable X-braces to resist wind and seismic forces, five levels of horizontal truss girders, and three 200-foot tall antennas.