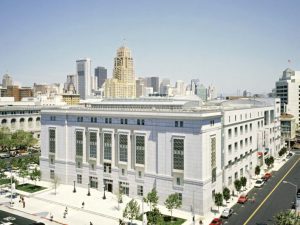 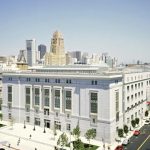 The new San Francisco Main Library is a significant addition to the Beaux Arts style of architecture in San Francisco’s Civic Center district.  The library was moved from the location of the current Asian Art Museum to the newly designed 100 Larkin Street building, funded by $104.5 million in bonds and $22 million in private donations.  The 375,000 square foot building with six stories and a basement was constructed with steel special moment frames and 142 base isolators.  The library features a five-story sky-lit atrium, interior bridges connecting floors, a grand staircase rising four stories, and approximately double the amount of usable space than its predecessor.

The base isolation system was the first for a major U.S. public library and the first public building in San Francisco to use base isolators.