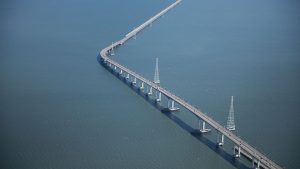 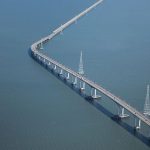 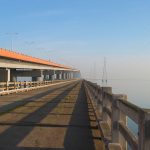 View of bridge from Werder Pier 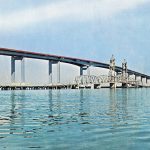 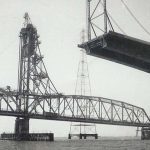 The San Mateo-Hayward bridge is seven miles long and connects the San Francisco Peninsula to the East Bay. The original bridge was opened in 1927 and was the longest bridge in the world, featuring a two-lane causeway with a 300-foot vertical lift spanning over the main shipping channel. The structure was approximately 35 feet in elevation and was constructed with trestle and truss spans.  Most of the 1927 bridge was demolished to allow for the construction of a larger replacement bridge in 1967. The Western approach was purchased by the County of San Mateo and currently serves as Werder Pier.

Plans to create a replacement bridge began in 1961 due to increased service demands and deterioration of existing structural components. The new bridge was constructed in 1967 with two main spans: the Eastern Trestle Span and the Western Highrise Span. The all-steel superstructure at the Western highrise span features an orthotropic deck over two parallel box girders while the Eastern span features a low-rise deck supported by 4,840 prestressed hollow concrete piles. The bridge closed briefly following the 1989 Loma Prieta Earthquake which prompted extensive seismic retrofits between 1997 and 2000. Further work to the bridge continued in subsequent years including the completion of a new eastern trestle to widen the bridge (2002), expansion of Eastbound traffic to three lanes (2003), repair of a seismic beam (2010), and repaving (2015).