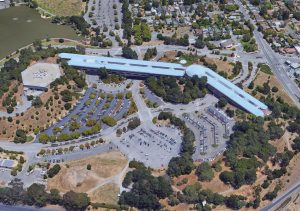 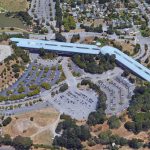 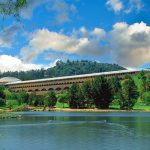 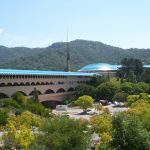 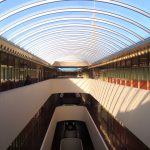 The Marin County Civic Center is a four-story concrete shear wall building constructed in 1962.  The building is 80 feet wide and consists of two wings, 580 feet and 880 feet long, joined at a 120 degree angle. The original structural engineer of record was Irvan F. Mendenhall of DMJM in Los Angeles. The structure underwent a seismic retrofit by SOHA Engineers following the 1989 Loma Prieta earthquake.

The structure serves as the county services center for Marin County and is the last building designed by American architect Frank Lloyd Wright.  This was Wright’s largest public project, but he died in 1959, before its completion. The building’s primary architecture is circular, featuring sweeping archways of various sizes at each level and a 80-foot diameter rotunda joining the two wings.  The roof also consists of arch construction. The very distinctive architecture and blue roof are observable from Highway 101.