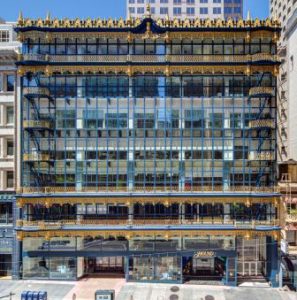 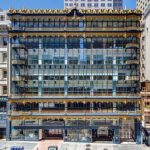 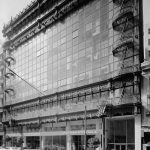 The Hallidie Building is an office building located at 130 Sutter Street, between Montgomery Street and Kearny Street. It is credited as the first West Coast building to feature glass curtain walls.

The building was designed by architect Willis Polk and is named in honor of San Francisco cable car pioneer Andrew Smith Hallidie. It has been referred to as the most architecturally important building in San Francisco.

UC Berkeley originally commissioned the building with the expectation that they would get a neo-classical building consistent with Polk’s other buildings in the SF Financial District. Instead, they ended up with the first glass curtain wall building in the bay area with detailing that takes features from the Gothic style street lamps of the era (still in lining Sutter Street today) and with elements from the surrounding historic buildings on the block. Despite the ingenuity and fame we see now, Berkeley was not pleased with the result and never used the building for their own purposes. They were especially embarrassed by the color scheme which was chosen to highlight the school colors.

The instantly recognizable exterior balconies and fire escapes are important, but excessive for a building of this side. Willis decided to use the fire escapes as a detailing element and added an extra to make the building symmetric. These elements were deemed unsafe in 2010 and a two-year restoration began. This was completed in 2013, with care taken to restore safety without altering the original exterior and to bring back to life the original colors.