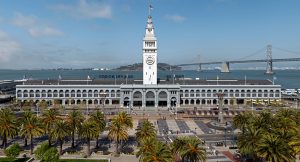 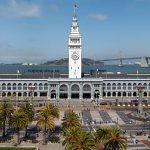 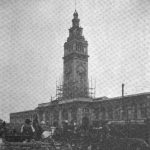 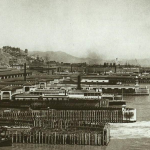 Until the 1930’s, when the San Francisco – Oakland Bay Bridge was constructed, the only practical way to reach San Francisco from other points in the Bay Area was by ferry. The Ferry Building was the largest project undertaken by the city when it opened in 1898 and acted as the central termination point for major cable car and ferry lines for over 30 years. At its peak, the building served more than 50 million commuters a year, making it the second busiest passenger terminal in the world, trailing only Charing Cross Station in London. With its rhythmic arcades and tall Beaux Arts tower, modeled after the 12th century Giralda Bell Tower of the Cathedral in Seville, Spain, the Ferry Building immediately became the city’s iconic postcard representation until the construction of the Golden Gate Bridge in 1937. After the construction of the Golden Gate Bridge and Bay Bridge, ferry service saw a sharp decline, and the use and importance of the Ferry Building dwindled. In the 1950’s, the charm of the Ferry Building was diminished due to conversion of the building into retail and office space and the construction of double-decked Embarcadero Freeway, thus obscuring the front view of the building. The freeway was torn down in 1991 after being severely damaged in the 1989 Loma Prieta earthquake, which shed new light on the forgotten Ferry Building. This would result in a total seismic retrofit and rehabilitation from 1999 to 2003. Today, the Ferry Building is once again an iconic symbol of San Francisco with much of its historic character restored. The building serves as an important ferry transportation hub and now houses a public marketplace, year-round farmers markets, and high-end office space. More than 10,000 commuters use the Ferry Building daily.

The San Francisco Ferry Building is a steel frame and reinforced concrete structure with a sandstone facade. The structure is built entirely over unreinforced mass concrete piers on timber piles and the main building has a special concrete shear wall lateral-force-resisting-system. At the time of construction in 1898, the foundation was considered the largest foundation built over water in the world. The foundation is credited, in part, with the relatively little damage the building experienced in both the 1906 San Francisco and 1989 Loma Prieta earthquakes. The clock tower stands 235 feet tall and the Grand Nave spans 660 feet.

The clock tower withstood the 1906 San Francisco earthquake, but incurred significant non-structural damage. The damaged brick and sandstone walls were replaced more than a year later with reinforced concrete.

The full seismic retrofit and renovation of the Ferry Building occurred between 1999 and 2003.