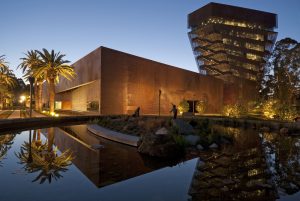 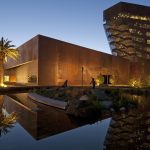 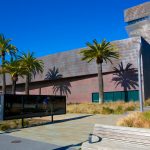 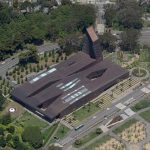 The original museum originally opened in 1895 and was housed in the Fine Arts Building that was part of the California Midwinter International Exposition from the previous year. Michael de Young, an early San Francisco newspaperman, planned an addition that would serve as the core of the de Young facility. The addition was completed in 1919. Later, the museum was further expanded with a central section, a west wing, and a signature tower. Michael de Young’s efforts were honored with the changing of the museum’s name to the M. H. de Young Memorial Museum. The original museum structure was then damaged by the 1989 Loma Prieta earthquake and it was decided to replace it with the new museum, which was completed in 2005.

The structural engineers provided solutions to a number of design challenges in order to bring the architect’s vision to life. These included a highly irregular floor plan with many diaphragm openings, expansive cantilevered truss eaves the project 62 feet, and interior bridges spanning over 90 feet. The building was designed for various heavy live loads for art exhibits and large interior landscaped courtyards. The structure also has 400 feet long building wings with only 20 feet of connecting floor and roof diaphragm, and a significant quantity of non-orthogonal connection geometry driven by the architectural layout. It is a pioneering example of computer-assisted design and fabrication; no two pieces of the cladding are the same.

The main building used base isolation consisted of 76 high damping rubber elastomeric bearings by Bridgestone Rubber of Japan, 76 special flat sliding bearings made by Earthquake Protection Systems of California, and 24 nonlinear fluid viscous dampers by Taylor Devices of New York. The separate education Tower rotates 30 degrees in plan as it rises, with rectangular shaped floors of 38 feet by 90 feet at the base changing to parallelograms at the upper floors. It is a fixed-based tower that is seismically separated from the main museum building.