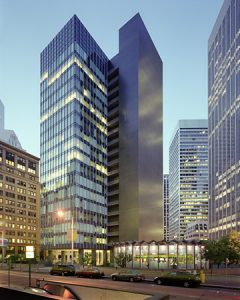 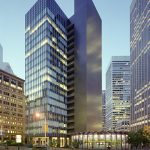 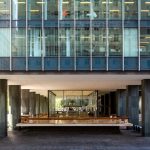 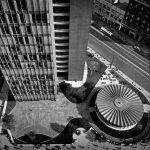 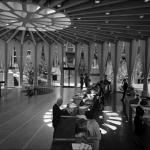 The Crown Zellerbach Building was the first International Style curtain-wall tower to be built in San Francisco, the first significant structure built in San Francisco after the great depression, and the second glass curtain wall building in the city, after the Hallidie Building. This building has since claimed a position as a lasting figure in the downtown street-scape.

Occupying one-third of a triangular site, the Crown Zellerbach Building consists of a 20-story office tower and an attached service tower. The structural framework is made of welded steel trusses with a 63-foot span overlaid by steel decking supported on purlins. The structure cantilevers 11 feet beyond the center line of the columns on two ends and supports the glass façade. An 8-foot-thick reinforced concrete mat slab, located approximately 45 feet below street level, distributes the column load over its entire surface.

The project includes a revolutionary open floor design, given all the columns are on the outside edge of the floor plate. As well as, a sweeping plaza layout typical of International Style buildings. In the concept sketches, the plaza was drawn as a water-filled moat. The service tower is clad in hand-laid Italian mosaic by Italian sculptor Marcello Mascharini. The one story building occupying the same block is said to resemble a daisy printer wheel in honor of the building’s original tenants, the Crown Zellerbach paper company. After the hostile takeover of this company in 1985, the building was renamed One Bush Plaza.