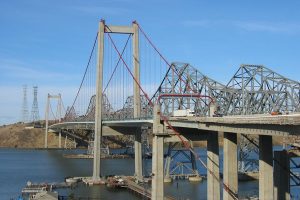 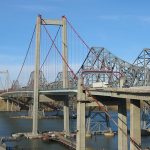 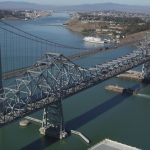 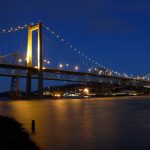 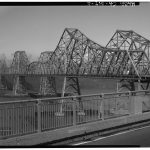 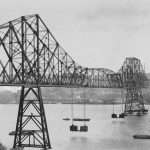 In addition to being the first major automobile bridge in the Bay Area, the original Carquinez Bridge was the second largest cantilevered truss steel bridge in the United States and the fourth largest in the world.  Environmental factors such as the deep waterway channel, strong currents, and frequent high winds were a challenging facet of the construction for engineers and ironworkers, as the support pier was one of the deepest ever constructed at the time.

The original Carquinez Bridge, built in 1927, was a cantilever steel bridge that is over 400 feet tall and spans nearly 3,500 feet over the Carquinez Strait.  The bridge is supported by abutments on land and steel trussed pier supports along the midspan.  The construction of the bridge provided a vital link along Interstate 80 between the cities of Crockett and Vallejo.  A second identical cantilever bridge was constructed in 1958 parallel to the original.  Both bridges suffered structural damage following the Loma Prieta Earthquake, prompting a retrofit of the second bridge and the replacement of the first bridge with the iconic Alfred Zampa Memorial Suspension Bridge.  Today, the bridge is maintained by the California Department of Transportation and serves an average of 50,000 vehicles per day with the 1958 bridge serving Eastbound traffic flows and the Alfred Zampa Memorial Bridge serving Westbound traffic flows.