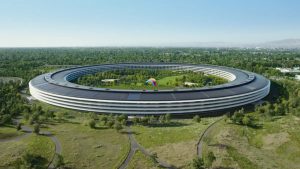 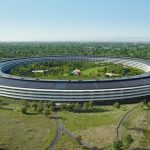 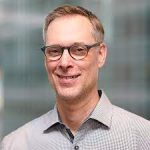 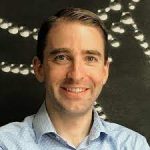 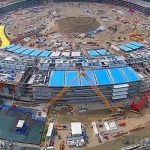 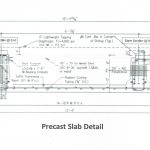 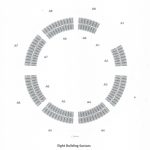 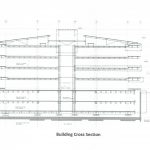 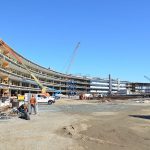 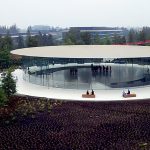 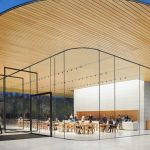 Steve Jobs Innovator and Pioneer and Visonary He established and defined Personal Computers and operating system, ipads (tablets), ipods (digital music), iphone (cell phone and operating system), iwatch (bluetooth device connected to the world on your wrist) – each of these products defined a multi billion International market that continues today.

Apple Park is 175 acres of unique Architecture, Engineering and Construction. Apple Park is famous for its 1,532 feet diameter, four story, curved glass façade and glass canopy building which is now known as the “spaceship”. The building is thought to be the largest precast concrete office building ever built. The building’s curved glass façade is one feature that contributes to the unique reputation of Apple’s flagship. The main office building curved glass panels are the largest in the world. When people walk around the building they barely see a mullion or wall because the joints are so far apart that it feels like the glass is seamless.

The building has a outside diameter of 1,532 feet with a ring width of 180 feet. The ring is divided into 104 radial sectors, grouped into nine (9) independent structures, one of which is the four level Town Square and Restaurant. At the eight cardinal axis points, full-height atria create light-filled entrance commons: social spaces that connect the park to the garden space within. Breaking this rhythm, the Restaurant – a campus town square – occupies the Ring’s entire north-east axis. The Ring’s interior hosts large rooms with glass walls and entryways, including wide-open spaces that can be collapsed into smaller sections as needed. The Ring is divided into eight identical segments and surrounded by a hallway roughly three-quarters of a mile around.

It has a quadruple-height dining hall and outdoor terraces. The Restaurant’s north-eastern facade can slide quietly away. Huge doors of glass, 50 feet high and 180 feet wide, roll on tracks beneath the floor. They are the biggest of their kind ever constructed, and enhance the sense of landscape sweeping through the building.

The building opened in 2017 after + seven (7) years of planning, design and construction. Steve Jobs himself pitched the Foster and Partners design to the Cupertino City Council in 2011 in order to assure Planning approval for this Silicon Valley landmark. In addition to four levels above ground the building includes three underground levels. The $ 4 billion, Apple Park includes the “spaceship” headquarters building, a 1,000 seat Steve Jobs Theater/Auditorium, a Visitors Center, a Fitness – Wellness Center, a Parking Structure, and a restored and relocated historic wood barn associated with the plum tree orchards that was Silicon Valley.

The radial wall and column grid require 35 feet to 45 feet long voided slabs, to span between the radial column/wall grids. The building has 2 subterranean levels of parking and four office levels above grade. Clark Pacific provided all of the architectural and structural precast concrete components, which make up a majority of the office building. In total, over 2.5 million square feet of precast concrete was used to produce the columns, beams, walls, fascia, beam covers and void slabs. The 35 inch deep radial girders, support the voided precast slabs span 25 feet and 39 feet with a 15’ – 6” cantilever. The building has a 42 inch deep floor system. A cast in place concrete diaphragm was placed over the slabs and girders and shear walls.

“From a structural perspective, another feature the Jobs required was the main office building has seismic isolator bearings. Eric Borchers says. “It’s in a high seismic region close to the San Andreas Fault. The entire building is supported on seismic isolation bearings. So, even if the ground starts shaking violently with the force of as big an earthquake as you can imagine in that area, these seismic bearings are designed to greatly reduce the force of the quake.” Apple Park is currently the largest base-isolated building in the world … and this feature is one unique aspect of the campus.

The underground garage parking is composed of post-tensioned, prestressed radial beams, stack framed with the columns, double tee and slab floor members, tangential beams and moat spandrels, and shear walls. Clark Pacific self-performed the design and construction of the upper office building and lateral loads with Arup. The stack framed precast concrete beam/column system was a complex frame system, designed to be compatible with the lateral force resisting precast concrete shear wall system. The radial beams cantilever to support the perimeter moat spandrels and are engineered for very low deflection criteria given they support the elaborate glass curtain wall facade above. New tee, beam and column forms were built to form the large radius corners that are prevalent throughout the garage and the entire project. Stack framing and dapped members and overall attention to hiding connections contribute to the sleek, modern look that Jobs demanded for all Apple products.

The building is the world’s largest naturally ventilated building, projected to require no heating or air condition for nine months of the year. This is achieved by using the 4,300 hollow concrete slabs which act as the floors and ceilings as an innovative air-conditioning system. In effect, this makes it a ‘breathing’ building.

The campus is powered 100 percent by renewable energy and will include 17 MW of rooftop solar. Apple Park will be one of the largest on-site solar installations in the world. The campus will be supported by a microgrid and be supplied with 4 MW of power from Bloom Energy fuel cells. Approximately 75 percent of the campus power requirements during work hours will be met by on-site generation with the remaining portion coming from a 130-MW solar project built by Monterey County and First Solar.

The Steve Jobs Theater — located at Apple Park in Cupertino — picked up a 2018 “Structural Artistry” award from the United Kingdom Institute of Structural Engineers, given to buildings which have been “transformed by the vision and skill of the structural engineer into something exceptional.” The theater’s above-ground pavilion is “the largest structure in the world solely supported by glass,” the Institute said. Although made of carbon fiber, the roof still weighs some 80 tons. Each glass panel holding it up consists of just four layers of 12-millimeter thick plies, nevertheless built to cope with California’s dangerous seismic activity. Electrical systems, sprinkler pipes, and other needed infrastructure items are made invisible by hiding them in 30-millimeter joints between the panels.

A lens-shaped roof rests gently on a transparent 22-foot- (6.6-meter-) tall and 135-foot- (41.1-meter-) diameter glass cylinder. The largest carbon-fiber roof in the world, it weighs 80.7 tons (73.2 metric tons), with just four layers of glass forming the structural support. It comprises 44 identical radial panels, which were assembled on-site and carefully craned into position onto the completed glass cylinder in a single lift. All its services, such as electric conduits and sprinkler pipes, are invisibly integrated within the thin silicone joints between the curved glass panels.

The purity of the lobby finds resonance in the ambitious custom glass elevator. In a world-first, it uses helical guide rails to rotate the car 171 degrees between levels. Two sculpted-stone stairways provide a slower descent into the belly of the Theater. The stairways culminate in a tight, compressed space, surrounded by three stone walls and a stainless-steel drum made of sliding panels.

The stone wall on the far side rises to reveal a 1,000-seater auditorium that brings people together to share in a collective experience. Great care was given to the geometry and seating arrangement to ensure the closest relationship between presenter and audience. It can comfortably host small internal gatherings as well as large events. After an event, the rear wall re-opens, returning guests to the third major space in the sequence. The seemingly permanent stainless-steel drum disappears to reveal a flexible sun-lit gathering space.

Apple is known to take a hands-on approach to much of its corporate and retail architecture, and in fact Jobs himself is credited with many of the decisions for Apple Park, though he died in 2011 before construction could start.

Apple Park’s Grand Opening was September 2017. There is little about this project that could be called usual. It is a part of the Apple way of doing things, to “think different” at every opportunity, including architecture and this engineering opportunity. “The biggest challenge was striving for perfection,” Borchers says. “Apple, as a company, is known world-wide for the design and quality of all their products. Apple Park was very much intended to be an expression of the company’s values and design standards. “In comparing all of the buildings that I have been in, Apple Park is probably the closest to perfection that you can get in a finished product,” says Eric Borchers. “It is really beautiful. Jobs insisted that all the architecture details are perfect.”