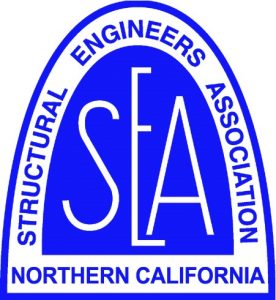 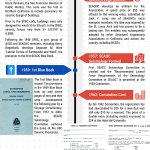 SEAONC has had a rich history of involvement in all areas related to structural engineering. Since the 1940’s, members have maintained direct involvement in the development of building code provisions, especially those dealing with earthquake-resistant design, by reviewing, writing, and updating the national building codes, local building codes, and various industry-sponsored code recommendations. After the 1933 Long Beach earthquake, code committees formed under SEAONC helped bring standardization to structural code requirements across different political jurisdictions. SEAONC has aided in the determination of standard specifications for new-to-the-market materials, such as lightweight concrete, wood glulam beams, pretensioned concrete, and much more. SEAONC contributed greatly to the production of the SEAOC Blue Book, or Recommended Lateral Force Requirements and Commentary, first published in 1959, that compiled earthquake design recommendations and incorporated lessons learned after seismic events.

In addition to code development, SEAONC has been involved in addressing issues of professional liability and litigation, the first example of which was by advocating for the requirement that structural engineers be professionally licensed. Led by Henry J. Brunnier, the Structural Engineer title was brought into being by the California legislature in 1932. Additionally, in 1948, SEAONC supported the the concept that structural engineering fees should be based on the total cost of a building, rather than just the structural costs. SEAONC has also been pivotal in the passing of legislation such as the Field Act, Garrison Act, California Hospital Act, and the Alquist-Priolo Earthquake Fault Zoning Act, as well as the defeat of the proposed Civil Service Act, which stated that only state-employed engineers and architects could work on state projects.

In 2015, SEAONC approved an initiative to explore the advancement and retention of women in structural engineering (ARWiSE).  This initiative broadened and evolved into the formation of the Structural Engineering, Engagement, and Equity (SE3) Committee. The committee’s work has led to the formation of the national SE3 Committee with the National Council of Structural Engineering Associations (NCSEA) and has started a national conversation regarding retention and equity of all structural engineers in our profession.