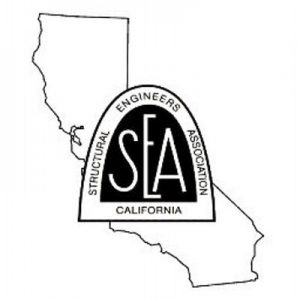 SEAOC was formed in 1932 as a collaboration between SEAONC and SEAOSC.  SEAOSC had originally started in 1929 in Southern California, while SEAONC was formed independently in Northern California in 1930.  When SEAOSC and SEAONC members recognized that there were benefits to be gained by working together, an exploratory meeting was held in 1931, and soon after, SEAOC was established.

Within the first few years of the organization’s existence, SEAOC had an impact on the structural engineering profession. SEAOC members led by Henry J. Brunnier were successful in getting the Structural Engineers Title Act passed in California in 1932. Following the 1933 Long Beach Earthquake, which caused significant damage to school buildings, SEAOC was influential in getting the Field Act passed, which established the Division of the State Architect (DSA), regulating the design and construction of school facilities in California.

In the 1940’s, the construction industry boomed following World War II, and SEAOC played a significant role in growing the California infrastructure. SEAOC members were influential in getting the first seismic design requirements into the Los Angeles Building Code (1943) and the San Francisco Building Code (1948). In 1947, SEAOCC was established and later in the year joined SEAOC. In 1948, SEAOC adopted the now familiar logo (based on the Gateway Arch) from SEAONC.

In 1967, SEAOSD was established and became the fourth member association of SEAOC.

Trying to follow up on the impact of the SEAOC Blue Book, but burdened by members’ lack of free time to work on important guideline issues, SEAOC financially seeded the formation of a new organization called the Applied Technology Council (ATC) in 1973. The purpose of the organization was to fund new structural engineering standards and practices through grants and donations rather than through voluntary efforts. SEAOC also supported the formation of the Building Seismic Safety Council (BSSC) in 1979, which was formed in an effort to get national acceptance of ATC-3: Tentative Provisions for the Development of Seismic Regulations of Buildings.

Following the 1971 San Fernando earthquake, SEAOC aided in the passage of two important pieces of legislation, the California Hospital Act of 1971 and the Alquist-Priolo Earthquake Fault Zoning Act of 1972.

In the late 1980’s, SEAOC collaborated with the California Office of Emergency Services to establish a disaster response communications plan in an effort to more quickly mobilize structural engineers for rapid building assessments following a major disaster.

Following the 1994 Northridge and 1995 Kobe earthquakes, SEAOC recognized the need for structural engineers to address higher levels of structural performance than the traditional basic life safety code performance. In 1995, SEAOC published SEAOC Vision 2000: Performance Based Seismic Engineering of Buildings, the document that would provide the first framework for performance-based structural engineering guidelines and standards, including the current national standard, ASCE 41: Seismic Evaluation and Retrofit of Existing Buildings.

Today, SEAOC continues to serve the general public through the advancement and improvement of the structural engineering profession and advocacy for better performing structures.

For more about the history of SEAOC, please refer to “The Evolution and History of SEAOC, a Celebration of 75 Years of History, 1929 to 2004,” Atkinson, Thomas G. and Kiland, Jon P., SEAOC 2004 Annual Convention Proceedings, 2004.