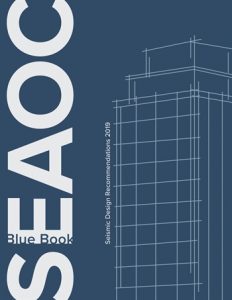 The origins of the SEAOC Blue Book date back to the early 1950’s. In 1951, a joint committee from the American Society of Civil Engineers (ASCE) and the Structural Engineers Association of Northern California (SEAONC) published a paper in the proceedings of ASCE, “Lateral Forces of Earthquake and Wind,” also known as Separate 66. The paper recommended analyzing buildings as a single degree of freedom system, rather than as a function of the number of stories. While the paper was criticized for oversimplifying the analysis of structures, this principle is still the basis for how buildings are analyzed for lateral forces today.

At the time, many jurisdictions were not consistent in the application of code provisions with regard to lateral forces. SEAOC members in Northern and Southern California formed a committee to attempt to come up with a common, consistent approach for designing for lateral forces. The result of their efforts was the publication of the first edition of the SEAOC Blue Book in July 1959. Since lateral force requirements in building codes were virtually non-existent at the time of publication, the document quickly became the de facto standard for designing buildings for lateral forces, particularly seismic forces.  Eventually many concepts and practices from the Blue Book were directly incorporated into the Uniform Building Code as code provisions.  In fact, many of today’s seismic code provisions origins can be traced back to the SEAOC Blue Book. For forty years, the document was renowned world wide as the preeminent publication regarding seismic engineering.

As the building code development process transitioned from the regional Uniform Building Code to the nationally adopted International Building Code in 2000, the influence of the SEAOC Blue Book diminished as it became a smaller voice in a larger conversation. However, the document has evolved and now serves as guidelines and commentary for current code provisions and still provides the basis for good seismic design of structures.

The Structural Engineers Association of California (SEAOC) Blue Book is a publication of the SEAOC Seismology Committee. The document consists of a series of technical papers related to the practice of good seismic design. The SEAOC Blue Book is updated on a regular basis as new codes, research, and technologies become available for use by the practicing structural engineer. The ninth edition of the document was published in 2019.