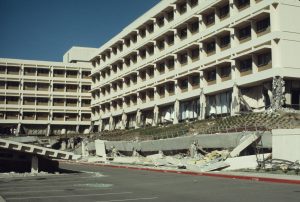 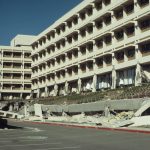 On February 9th, 1971, magnitude 6.6 earthquake shook the San Fernando Valley in southern California for 12 seconds. The epicenter of the quake was located in the San Gabriel Mountains, with numerous nearby Los Angeles communities affected. The most heavily damaged buildings were located in the Olive View Medical Center and the Veterans Hospital medical facilities in Sylmar. Both sites experienced collapsed buildings that were responsible for a large percentage of the overall death toll.

While the collapsed buildings lacked seismic instrumentation, a large number of surrounding buildings had been outfitted with sensors due to local ordinances. As a result of the earthquake, the volume of ground record data significantly increased and the success of local instrumentation spurred the creation of California’s Strong Motion Instrumentation Program (CSMIP).

There were a huge number of private homes and businesses damaged due to surface ruptures. As a result, legislation was put into place the following year to locate faults and create boundary zones where no new construction would be permitted. The legislation, originally known as the Alquist-Priolo Earthquake Fault Zoning Act, also informed existing home owners and businesses of their proximity to known faults.

Because the largest number of collapsed buildings and deaths occurred in medical buildings, the earthquake started a conversation about the state of medical buildings in California. Eventually this lead to the creation of the Office of Statewide Health Planning and Development (OSHPD) in 1978 to provide the State with an enhanced understanding of the structure and function of its healthcare infrastructure.