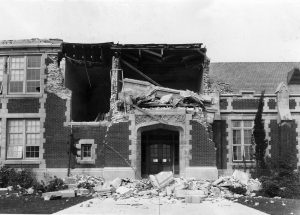 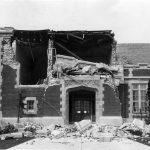 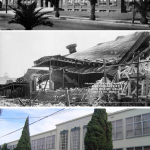 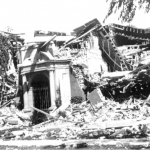 At 5:54 pm on March 10, 1933, a magnitude 6.4 earthquake hit 3 miles south of Huntington Beach in the Los Angeles area. The ground shaking lasted only 10 seconds but caused significant damage. The epicenter was approximately 8 miles deep and the event occurred along the Newport-Inglewood Fault. It is estimated that the fault ruptured for about 9 miles in the subsurface, as there was no surface fault rupture.

Long Beach was the first earthquake recorded by the then recently-developed strong motion instruments, known as accelerographs. Acceleration recordings were off the scale on some instruments. The maximum recorded ground acceleration was 22 percent of the force of gravity.

Financial damage totaled approximately $50 million in 1933 dollars (equivalent of $900 million today). The worst structural damage occurred in poorly designed buildings founded on landfill or deep, water-soaked alluvium or sand. These conditions also resulted in liquefaction and lateral spreading. Structurally, unreinforced masonry structures fared particularly poorly. In total, there were 120 deaths. An estimated two-thirds of these occurred as people ran out of buildings and were hit by falling debris.

However, what gained the most attention was the fact that school buildings were the most commonly and severely damaged structures. More than 70 schools were destroyed and 120 damaged, which represented approximately 75% of the schools in the area. Fortunately, schools had closed for the day in the late afternoon, otherwise the fatality numbers could have been vastly higher.

This earthquake was the catalyst for the very first policies to mandate the safety of building design and construction practices in California. The poor building performance brought into focus the importance of reconstructing on a sound basis and designing structures for both vertical and lateral forces. Although engineers had been working to establish earthquake design requirements at the time, this event was used as the formation of a consensus, resulting in the Riley Act. This act required all California local governments to have a building department that provided inspections of new constructions and mandated that all structures be designed to withstand a minimum horizontal force equivalent to 2% of the total building weight.

Additionally, since this event so clearly highlighted the issues associated with the safety of school buildings, within a month of the earthquake, California passed the Field Act. This legislation has become the earthquake’s major legacy and has continued to mandate the safe design and construction of school buildings in California through the Division of the State Architect (DSA).

Lastly, the poor performance of unreinforced masonry buildings in this earthquake was a motivation for the eventual prohibition of this form of building construction in California.