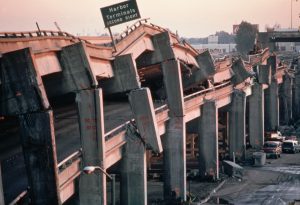 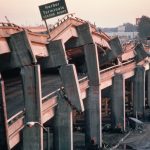 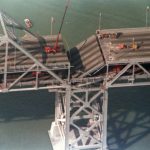 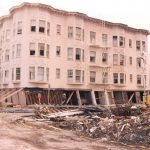 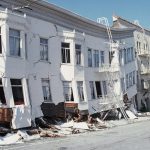 On Tuesday, October 17, 1989, at 5:04 PM, the largest earthquake to strike the San Francisco Bay Area since 1906 shook the region violently for 15 seconds, killing 63 people and injuring over 3700. Total damage and loss costs due to the earthquake were estimated to be $6 billion. The epicenter was located in the Santa Cruz Mountains west of Loma Prieta Peak on a previously undiscovered fault near the larger and well known San Andreas Fault. Damage was widespread on each side of San Francisco Bay and included the collapse of the upper level of the concrete double-deck Nimitz Freeway in Oakland near Cypress Street, the collapse of a fifty foot section of the San Francisco-Oakland Bay Bridge, unreinforced brick masonry wall failures in San Francisco, and partial collapse of the Pacific Garden Mall in downtown Santa Cruz 10 miles from the epicenter.

Prior to October 17, the region experienced smaller quakes up to a maximum Richter magnitude 5.4 in August of 1989 that caused damage including broken windows, cracked walls and collapsed chimneys leading some to anticipate a future large magnitude event in the area. After shocks rattled nerves for weeks after the main shock.

The seismic event occurred just before the start of Game 3 of the “Bay Bridge” World Series between the San Francisco Giants and the Oakland Athletics, which lead to widespread national television coverage of the devastation to the area including the collapse of the Cypress structure freeway, collapse of a section of the San Francisco – Bay Bridge, and burning buildings in the Marina District of San Francisco. Due to participation of the two local teams in the World Series, road traffic at the time of the earthquake was lighter than usual and may have prevented additional fatalities.

The Marina District in San Francisco shook longer than 15 seconds due to the unconsolidated soil conditions of the infilled bay below the neighborhood. The saturated soil experienced widespread liquefaction and lead to the collapse of soft story wood framed apartment buildings. Soft story buildings are constructed of relatively stiff upper story walls over ground floor parking areas supported by columns. The severity of the damage exposed the vulnerability of soft story buildings to seismic events.

The earthquake would result in increased federal funding, primarily through the Federal Emergency Management Agency (FEMA), for better practices to increase the seismic safety of structures for the next decade. The San Francisco Unreinforced Masonry Building Ordinance would be enacted following the earthquake to inventory and retrofit this most vulnerable building type.