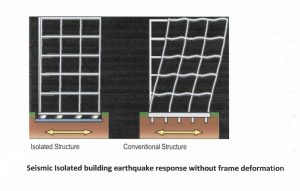 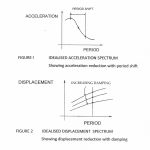 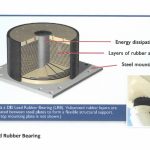 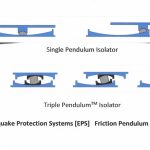 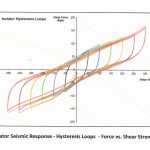 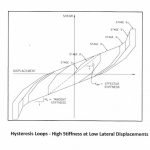 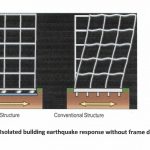 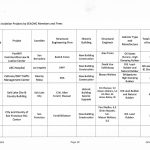 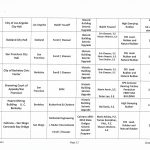 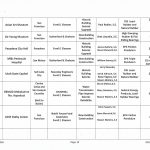 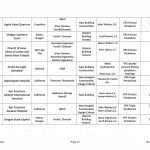 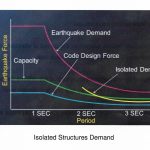 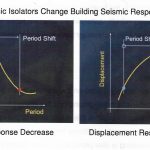 Seismic Isolation and How It Works

Seismic isolation, also known as “base” isolation, is a means of protecting a structure, building or bridge, from the devastating effects of earthquake shaking. The structure is protected by “decoupling” it from the shaking ground. Practically this is achieved by supporting the structure on several specially designed elements, isolators, that are stiff vertically – hence able to support the weight of the structure without deforming – and flexible in the horizontal direction, achieving the desired “decoupling.” The idea is to reduce the ground motion transferred to the building which reduces lateral forces and structure displacement and deformation so the entire may translate back and forth with the isolator displacement but the differential floor displacements are greatly reduced. The isolators accommodate most of the ground motion.

Seismic isolation (also known as “base” isolation) is a means of protecting a structure, building or bridge, from the devastating effects of earthquake shaking. The structure is protected by “decoupling” it from the shaking ground. Practically this is achieved by supporting the structure on several specially designed elements (isolators) that are stiff vertically – hence able to support the weight of the structure without deforming – and flexible in the horizontal direction, achieving the desired “decoupling.”

The isolation concept greatly reduces the motions “felt” at the base of the structure resulting in moderate displacement, lower deformation, and lower structure demands on the lateral force resisting structure. The isolators absorb most of the ground motion.

Earthquakes generally have more energy associated with shorter periods of vibration and less energy associated with longer periods. Seismic isolation works by lengthening the horizontal period of vibration of a structure, achieved by the introduction of horizontally flexible isolators between the superstructure and the ground, thus reducing the amount of seismic energy which is transferred into the structure. Less seismic energy in the structure means less displacement and less structure damage.

The basic elements of a practical base isolation system includes:

1. A flexible mounting so that the period of vibration of the total system is lengthened sufficiently to reduce the force response.

2. A damper or energy dissipater so that the relative deflections between the building and ground can be controlled to a practical design level.

3. A means of providing rigidity under low (service) load levels such as wind and minor earthquakes.

Bridge structures have for a number of years been supported on elastomeric bearings, and as a consequence have already been designed with a flexible mount. It is equally possible to support buildings on elastomeric bearings and in excess of 150 examples exist in Europe and Australia, where buildings have been successfully mounted on elastomeric bearings. To date this has been done primarily for vertical vibration isolation rather than seismic protection. By increasing the thickness of the bearing, additional lateral flexibility and period shift can be attained.

An elastomeric bearing is not only means of introducing flexibility into a structure, but it certainly appears to be one the most practical and the one with the widest range of application to date. Other possible devices include rollers, sliding plates, cable suspensions, sleeved piles, rocking (stepping) foundations, air cushions, and coil springs.

The reduction in force with increasing period (flexibility) is shown schematically in the force response curve of Figure la. Substantial reductions in base shear are possible as the period of vibration is lengthened but the degree of reduction depends on the initial fixed base period and the shape of the response spectra curve.

However, the additional flexibility needed to lengthen the period will also give rise to large relative displacements across the flexible mount.

0ne of the most effective means of providing a substantial level of additional damping is through hysteretic energy dissipation. The term hysteretic refers to the offset in the loading and unloading curves under cyclic loading. Work done during loading is not completely recovered during unloading and the difference is lost (dissipated) as heat.

Engineers have been studying how to decouple structures from the ground for 150 years. For excellent reviews of the historical development of seismic isolation technology see:

In 1976, U.C. Berkeley Professor James Kelly, in association with CJ Derham from Malaysian Rubber Research and Development Board [MRPRA] began working on the development of natural rubber bearings for the seismic protection of building and bridges. Over a period of about 5 years, this collaboration led to a series of experimental tests, both at the component level and on entire isolated structures on the shaking table of the Earthquake Engineering Research Center (EERC) at UC Berkeley. The results from these early tests were very promising and led to the first base‐isolated building in the United States, the Foothill Communities Law and Justice Center (FCLJC), which was also the first building in the world to use isolation bearings made from high‐damping natural rubber developed for this project by MRPRA. In the early 1980’s, when Alexander Tarics was providing Structure Engineering for construction of a new court building in Rancho Cucamonga, he persuaded San Bernardino county officials to try seismic isolation. Prof. Keely said, “Alex’s persuasiveness got this THING going.”

By the early 1990s, seismic isolation had evolved to a viable and dependable seismic protection strategy with major buildings and bridges being supported either on lead‐rubber bearings, natural rubber bearings, or single‐concave sliding bearings. Following the 1994 Northridge, California and the 1995 Kobe, Japan earthquakes, seismic isolation enjoyed increasing acceptance world‐wide for the seismic protection of civil structures.

The first type derives its horizontal flexibility from a natural rubber elastomer. To meet the requirement that the isolator be stiff in the vertical direction with a high load-carrying capacity, thin horizontal layers of vulcanized rubber are sandwiched between alternating thin steel shim plates in a laminated construction.

A set of hysteresis loops shows high stiffness at low lateral displacements, and each cycle of displacement encloses an area, indicative of energy dissipation. The loops have a positive slope indicating a restoring force is generated to return the supported structure to close to its original position.

The second type derives its horizontal flexibility from sliding between two surfaces. Friction pendulum isolators are the most common type of friction slider. Sliding occurs in a spherical dish and the motion mimics that of a pendulum. As lateral movement occurs, the supported structure necessarily rises slightly as the slider travels up the dish. The resulting potential energy creates a restoring force that returns the supported structure to close to its original position. The friction mechanism dissipates seismic energy as the isolator cycles back and forth, and provides high initial stiffness under non-seismic lateral loads.

Friction pendulum isolators have evolved from the original single dish with one sliding surface to the current norm.

The theoretical plot of horizontal force versus lateral displacement of a Triple PendulumTM isolator can take on a variety of shapes depending on the radii and friction coefficients for the various sliding surfaces.

A set of hysteresis loops shows high stiffness at low lateral displacements, with successive softening as displacements increase, and final stiffening regimes to control displacements during the most severe earthquakes. All loops have a positive slope arising from the “dish” geometry of the isolator.

Related Technology to Support the Practical Application of Seismic Isolation

The practical application of seismic isolation depended upon advances in three related technical areas. In each area, SEAONC engineers were at the forefront.

a. Computer models of isolated structures are necessary to predict their dynamic response, both globally quantifying the benefits of seismic isolation and locally computing force and displacement demands on individual isolators.

Two SEAONC members, U.C. Berkeley Professors Ed Wilson and Graham Powell were at the forefront of the development of software for nonlinear dynamic analysis. At Computers and Structures (CSI), a major SEAONC Sponsor, Ashraf Habibullah commercialized the UC Berkeley software and today most seismically isolated projects in the United States use CSI software. SEAONC’s Dr. Martin Button, amongst others, was an early user of CSI software, applying it to the analysis of seismically isolated structures before explicit isolator models became available.

b. Isolator test beds with large load and displacement capabilities are required to demonstrate that physical isolators could sustain large compression loads and simultaneous horizontal displacements. SEAONC’s Professor Jim Kelly at UC Berkeley developed an isolator test rig that was used to demonstrate the robustness of isolators for the first US isolated building in the mid-1980s. Physical testing of isolators demonstrates their ability to simultaneously support large loads and sustain horizontal displacements. Further, it allows lateral stiffness properties of isolators to be measured and compared with properties assumed in design.

Today, reputable isolator manufactures have in-house isolator test rigs. But some projects require a combination of compression loads, lateral displacements and lateral velocities that are significantly beyond the capability of manufacturers’ rigs. As a result, Caltrans and UC San Diego jointly developed the SRMD (Seismic Response Modification Device) Test Facility which came on-line in 1999. In addition to very large capacity, this facility offers independence from manufacturers’ in-house testing. SEAONC’s Dr. Ian Aiken was a member of the design review panel for this impressive piece of equipment.

c. Developments in engineering seismology, particularly in characterizing ground motions at a given site and at longer periods, has been vital to the acceptance of seismic isolation technology. Advances in seismology since the 1980s have enabled the generation of site-specific ground spectra and sets of site-specific ground acceleration records, which consider fault types and distances, site characteristics, and return period. These data are basic input to the analysis of seismically isolated structures. Use of site-specific ground motions gives greater confidence that the computed response of an isolated structure, including demands on the isolators, are soundly based. SEAONC members Dr. Neville Donovan and Maury Power were early contributors to the understanding of long-period ground motions. SEAONC members John Egan, Dr. Ramin Golesorkhi and Stanford Professor Jack Baker follow in their footsteps with current contributions.

The availability of a design code is a key step in the implementation of any new technology. SEAONC was a leader in developing the first US code that addressed seismic isolation.

In 1986 the Base Isolation Subcommittee chaired by Eric Elsesser of the SEAONC Seismology Committee published Tentative Seismic Isolation Design Requirements. The SEAOC State Seismology Committee then refined these requirements in Design and Construction of Seismically Isolated Buildings. The International Conference of Building Officials (ICBO) adopted the provisions developed by SEAOC as part of the 1991 Uniform Building Code, appearing as an Appendix to Chapter 23, Earthquake Regulations for Seismic-Isolated Structures.

The first edition of ASCE 7, Minimum Design Loads for Buildings and Other Structures, was published in 1998. Provisions for Seismically Isolated Structures appeared as a sub-section of Chapter 9, Earthquake Loads. By the 2005 edition of ASCE 7, Seismic Design Requirements for Seismically Isolated Structures appeared as Chapter 17, where these requirements remain today in ASCE 7-22. There are also provisions for seismic isolation as a retrofit strategy, codified as Chapter 14 in ASCE 41-17.

Since Eric Elsesser’s pioneering efforts in the mid-1980s, SEAONC members have continued to play a major role in the evolution of code provisions for seismic isolation. Dr. Charlie Kircher, Dr. Ron Mayes, Dr. Ian Aiken, Dr. Martin Button and Dr. Victor Zayas, amongst others from SEAONC, have made significant contributions. Bob Bachman of SEAOSC, and SUNY Buffalo Professors Mike Constantinou and former SEAONC member Andrew Whittaker have also been at the forefront of seismic isolation code development.