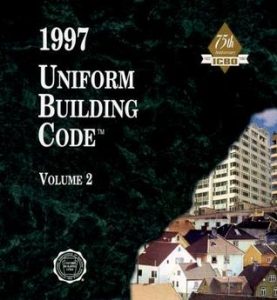 The 1997 Uniform Building Code (UBC) was published by the International Conference of Building Officials (ICBO) as the model building code for the Western United States. The code went into effect as the 1998 California Building Code (CBC) on July 1st, 1999.

Significant updates to the seismic provisions were made following the 1994 Northridge earthquake. This included a transition to strength based design, the introduction of the redundancy factor and modern response modification factor, stricter detailing requirements for system ductility, addition of near-fault factors to the base shear equation, and restrictions on structural irregularities in high seismic regions.