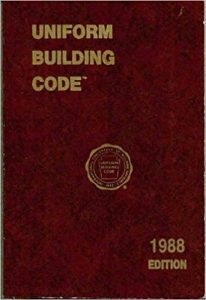 California Senate Bill 2871, which required building standards from a specific model code shall be applied to all occupancies throughout the state, was first put into place with the 1989 California Building Code. This, in effect, unified the building code requirements for all state agencies.

Significant changes were made to the seismic provisions. Prior to this edition, much of the UBC seismic design requirements were based on the SEAOC Blue Book, “Recommended Lateral Force Requirements and Commentary”. The 1988 UBC incorporated recommendations outlined in the document, ATC 3-06, including the use of new response modification factors and a change to the seismic lateral force base shear equation.