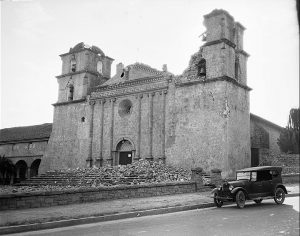 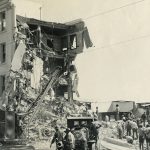 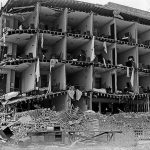 The Santa Barbara earthquake struck at 6:44 a.m. on June 29, 1925. The earthquake killed 13 people and destroyed the historic center area of the city causing estimated damages of $8 million ($116 million in 2019). The epicenter was on a fault in the Pacific Ocean off the coast in the Santa Barbara Channel and was felt from Santa Ana, San Bernardino to Monterey County.

The earthen 720-feet long, 25-foot high Sheffield Dam near the city collapsed during the earthquake due to liquefaction of the sandy soil beneath the dam. It is the only dam to fail during an earthquake in the United States to date. The released wall of water poured down the streets carrying cows, trees, cars, three houses and flooding the lower part of the city before draining to the ocean.

The earthquake would be the catalyst for the publication of the first edition of the Uniform Building Code in 1927, which addressed the hazards of structures constructed of unreinforced concrete, brick, and masonry.