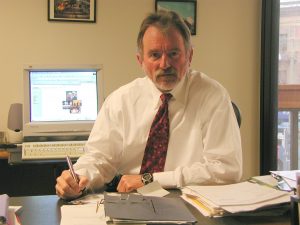 Reinhard Ludke, S.E., fifty (50) years of engineering and construction experience started in 1969 when he joined the Operating Engineers Union and performed construction surveying for highway construction near Rochester, New York and site surveys for the new SUNY Buffalo campus construction.  His undergraduate studies were in Civil Engineering from 1968 – 1972 at SUNY Buffalo. In 1972, he was a carpenter constructing single family and multiple unit residential buildings.  In 1973 he moved to San Francisco and joined Earl & Wright Consulting Engineers where he engineered marine structures including the Valdez Alaska Pipeline Tanker Terminal berthing and mooring jackets and the Maui A gas production platform offshore New Plymouth, New Zealand.  During a 1975 London assignment he was responsible for engineering the transport, naval architecture, and installation of the North Sea Thistle Field oil production platform from Grayshore Shipyards to the +500 ft deep water site.  He was a member of the E&W advanced analysis group where he was using the Nonsap Finite Element program to model and analyze stress concentrations in complex tubular steel and stiffened radial steel plate structures to assess stress cycles and fatigue life from continuous harsh ocean environment force cycles generated by wind and waves.    In 1975, while challenged with the pioneering and complex marine structure engineering at E&W, he decided to expand his education and studied for his Masters of Science in Structural Engineering and Structural Mechanics at UC Berkeley from 1975 to 1977.  Due to his 3 years of engineering experience, UC Berkeley SESM department asked Reinhard to be a Teaching Assistant where he supported undergraduate students and the SESM faculty including Graham Powell, T.Y. Lin, and Ed Wilson.

In 1986, he started his firm, Rogers – Ludke Consulting Engineers that through corporate mergers and acquisitions, in 1996 became part of C+D Consulting Civil and Structural Engineers where he continued as Principal Structural Engineer and led the engineering of buildings, bridges and marine structures.   Some achievements for his firm were selection for the 1990 – 2010 Caltrans State Highway Bridge Seismic Program, and emergency engineering, repair and reconstruction of the historic registered Port of San Francisco Pier 29 fire damage for the 2014 San Francisco Bay America’s Cup races won by Larry Ellison’s team.  EBMUD selected his firm as one of two companies for the 1998 – 2008 EBMUD Seismic Improvement Program to seismically strengthen the District’s water storage structures.  His office provided over 20 years of marine engineering for the Port of San Francisco projects including Pier 52 Boat Launch, Pier 45 Fuel Dock, and SFFD Fireboat Station 20 Pier strengthening.  He managed the E/A and Swinerton Construction team, with City and Port support for engineering, permits (7 phased permits), procurement, fabrication and construction in 5 months.   His firms had over a 30-year history of OSHPD permitted healthcare projects and DSA Schools including multiple projects at John Muir Medical Center, San Francisco General Hospital, and a SB1953 project, the San Jose Valley Medical Center, Old Main Hospital replacement.

Reinhard Ludke was a SEAONC Director and Treasurer, the 2008 – 2009 SEAONC President and a Director and Secretary of SEAOC from 2007 – 2009.  He is an elected FELLOW of SEAONC and SEAOC.