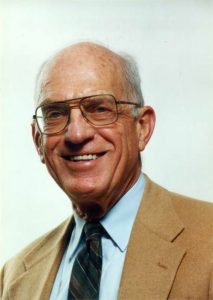 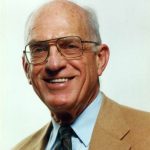 Ray Clough was born on July 23, 1920, in Seattle, Washington. He graduated with his bachelor’s degree in civil engineering from the University of Washington in 1942. After serving in World War II, Ray attended graduate school at the Massachusetts Institute of Technology, where he received his Sc.D degree in 1949. Immediately following graduation, he joined the faculty of the Department of Civil Engineering at the University of California, Berkeley, where he would remain until his retirement in 1987.

Ray’s most important contribution to the structural engineering profession is the development of the Finite Element Analysis Method beginning in 1956. He and research students, including Edward L. Wilson, would develop and refine the analysis method over the next decade, coining the term “finite element method” in a paper in 1960. The importance of his work would not be realized until the speed and capacity of computers improved beginning in the late 1960s. Today the finite element method is not only one of the cornerstone analysis methods in structural engineering, but also the primary method analysis of stresses in equipment in the aviation, automobile, nuclear, and oil industries.

In addition to his work in computational analysis, Ray also contributed to earthquake engineering research. His balanced approach of conducting physical experiments, both in the laboratory and in the field, helped verify and improve the development of more accurate analytical methods. Nonlinear dynamic response of multi-story buildings, structure-fluid dynamics, and dynamic responses on dams were just some of the many experiments Ray conducted on shake tables.

Ray and fellow professor Joseph Penzien established the Earthquake Engineering Research Center (EERC) in the 1960s to conduct many shake table tests to understand how structures behaved under realistic earthquake motions. The two professors published the book Dynamics of Structures in 1975, which became the international structural engineering standard for thirty years and the basis for many of today’s building code dynamic analysis provisions.