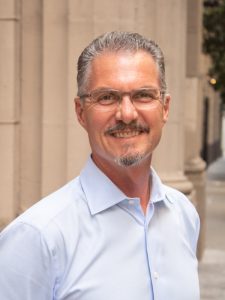 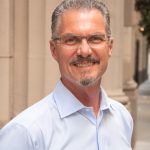 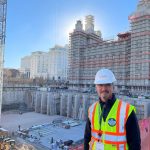 Mason at the Construction Site for The Church of Jesus Christ of Latter-day Saints Temple, 2021
Source: Mason Walters 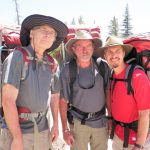 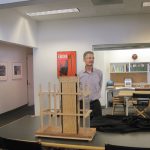 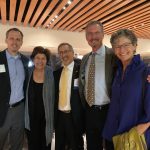 Mason Walters grew up in the San Fernando Valley and the foothills of the San Gabriel Mountains in Southern California, and was 15 when the 1971 San Fernando Earthquake hit the Los Angeles area. With the epicenter only 12 miles from his home, he experienced firsthand the devastation an earthquake can cause. He thought that there must be a better way of building, a way that didn’t cause disruption in the lives of so many.

He followed this curiosity into the world of buildings. After starting out as an Architecture major, he earned his Bachelor’s degree in Architectural Engineering at Cal Poly, San Luis Obispo and continued to University of California, Berkeley for his Master’s degree. These two educational experiences shaped his outlook going into the industry. In addition to the fundamental skills in engineering, at Cal Poly Mason learned how to take his own path. Isolated from other college students by the amount of work required for the Architecture and Architectural Engineering programs, he learned self-discipline and to follow his interests. At UC Berkeley, Mason gained a more analytical background and a cross-disciplinary perspective on how buildings fit into the larger environment. Here, Mason became interested in bridges and heavy construction.

In fall of 1980, Mason began work at the bridge design division of TY Lin International. He was able to work under Charles Redfield and TY Lin himself, and developed a background in the design, analysis, and construction of bridges for highway and light rail. It became evident that, even in seismically active regions, the practice of bridge design lacked consideration of seismic behavior. After four years, Mason shifted his focus back towards the seismic design of buildings and pursued registration as a California Structural Engineer. Consequently, in fall of 1984, Mason began his tenure at Forell|Elsesser Structural Engineers (F|E).

At F|E, Mason flourished in his career. He was a ferocious learner, reading and studying outside of the office. He plied his colleagues with questions, trying to absorb their knowledge and experience. In particular, he was mentored by structural engineers Eric Elsesser, William Honeck and William Davis, all of whom recognized their interactions with Mason and his contemporary colleagues as an investment in the future of firm as well as in the individual. Mason adopted this perspective as his career grew.

It was with Eric that Mason was drawn into base isolation projects, supported by his background in bridge design. Together, they developed the design for the world’s first application of seismic isolation of an existing historic building for the Salt Lake City and County Building in 1985. This project set the precedent for numerous subsequent applications. The greatest unprecedented challenge was how to place the isolators underneath a brittle, historic masonry building without damaging it. Eric posed this challenge to Mason as Eric left for a two-week lecture tour for EERI. When Eric returned, Mason presented a novel construction scheme that had never been done before. Mason and Eric met with Lee David at Malcolm Drilling to introduce the use of a flat jack into the installation, and the concept was up and running. 32 years later, that building was tested by the Magna Earthquake and performed as intended.

The completion of Salt Lake City and County Building seismic isolation retrofit was followed in rapid succession by the 1989 Loma Prieta and 1994 Northridge Earthquakes in California. Several historic public buildings were damaged as a result, including the city halls of San Francisco, Oakland, Berkeley, Pasadena and Los Angeles, as well as the San Francisco Public Library. The retrofit design and construction methodology that Mason and F|E had developed for the Salt Lake City and County Building was looked to as a prototype for many of these seismically damaged historic buildings. Seismic Isolation was recognized as the most effective, if not only, way to preserve these structures and keep them safely in service. From this point forward, Mason was part of several base isolation projects. His expertise was sought after as he went on to peer review numerous base isolation projects, and between 1986 and 1992 he assisted in the development of seismic isolation code guidelines as part of the SEAONC Protective Systems Committee.

Mason’s life has revolved around engineering – it became his passion. He embraces unique challenges and has become integral in many new developments and techniques in structural engineering, including:

Other notable projects that Mason contributed to include the seismic retrofits of San Francisco City Hall, Pasadena City Hall, UC Berkeley Art Museum/Pacific Film Archive (BAMPFA), Utah State Capitol, the UC Berkeley Memorial Stadium, and the Salt Lake Temple of the Church of Jesus Christ of Latter-day Saints. In addition, Mason is the SEOR for many new projects such as UC Berkeley Sutardja Dai Hall, Temple Beth Shalom in San Francisco, and the McMurtry Art and Art History and Bass Biology buildings at Stanford University.

Throughout his career, Mason sought to share his knowledge and perspective both with his immediate colleagues and with the rest of the industry. In his role as peer reviewer, he worked with a variety of clients including Apple, DSA, and Caltrans. He became the Charter chairperson for the University of California Seismic Advisory Board in 2017, charged with establishing the seismic evaluation process for assessment of all UC building structures throughout California and editing of the UC Seismic Policy. Mason is also a member of the Caltrans Seismic Advisory Board.

Mason’s career is defined by both his contribution to engineering innovations and his contribution to the growth of others. His contagious enthusiasm for the field and for learning spreads to those around him, encouraging unique solutions and inspiring future generations. He has learned to follow his interests and encourages others to do the same – to nurture the spark that fuels a passion. Mason has generously become a mentor for so many, both teaching and learning collaboratively from those around him – investing in each individual and pushing the profession further forward.