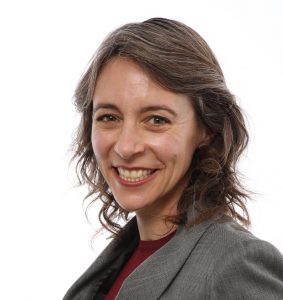 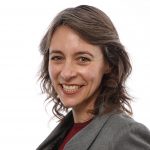 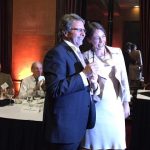 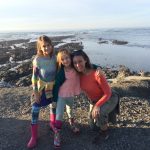 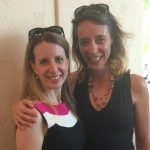 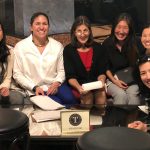 Kate Stillwell is the founder and CEO of the company Jumpstart Insurance Solutions, a surplus lines insurance broker focused on natural disaster resiliency.

Kate grew up in Minnesota, but attended high school in San Diego, California. She always enjoyed writing and art but knew she could not be an engineer “on the side”, so she chose to pursue a more technical career.Growing up, she was surrounded by engineers in her family, both men and women. From an early age, she saw what was possible through engineering. One of her aunts and three of her uncles were engineers.

Her eyes were set on Civil Engineering from the beginning of her undergraduate degree at the University of Minnesota. Kate always desired to pursue projects where she could point to a visible, physical result. In 1996, she received her B.S. in Civil Engineering from the University of Minnesota under advisor Jerry Hajjar. Kate went on to graduate school at Stanford University where she earned her M.S. in 1997. She was most engaged by structural engineering because, according to Hajjar, structural engineering contained the most analytical, and hardest-to-solve problems in the world of civil engineering. Unbeknownst to Kate at the time, she would wind up working on solutions to one of the more difficult, and most interdisciplinary problems facing structural engineering – that of resiliency.

For her graduate studies, Kate received a National Science Foundation grant. After finishing at Stanford, she worked under Gregory Luth for approximately one year. A notable project she contributed to while there was Disney’s Grand Californian Hotel adjacent to Disney’s California Adventure Theme Park. During her year there, she met Mohsen Rahnama, who would be one of her first points of contact in the world of insurance and risk management.

In 1999, Kate started working Degenkolb Engineers. She started at the same time as James Horne, Randy Collins, and Mark Sinclair. Degenkolb afforded Kate numerous opportunities to work on existing buildings and also work on culturally significant projects. While there were several projects of note, three rise above the rest. Stillwell contributed to designing the Man at the Burning Man festival in the Black Rock desert under the guidance of Mark Sinclair. She also worked extensively on the University of California, Berkeley Hastings Law School seismic retrofit. Of primary concern was a large plaster ceiling, which at the time was poorly anchored and created a hazard to the students. Additionally, she worked on a high-end residential project which pushed her to learn about the integration of steel and wood in residential projects to produce a resilient structure.

In 2004, John Dal Pino passed a flyer across Kate’s desk. It was for the U.C. Berkeley Haas MBA program which Dal Pino had completed years earlier. He knew Kate was interested in doing more than just design engineering. 2004 also served as a wake-up call to the United States with regards to disaster relief with the landfall of Hurricane Katrina along the Gulf Coast. Kate watched as days turned into weeks and then turned into months as folks tried to recover from the storm. She saw how the lack of resources available to those displaced by the hurricane lead to an even longer road to recovery than simply waiting for supplies. Kate recognized that resilience was the key to the puzzle. To try to bridge the gap, and broaden her horizons, she pursued an MBA while working at Degenkolb in 2004.

In 2005, Kate graduated from U.C. Berkeley and left Degenkolb to pursue independent work as a structural engineer. She worked with Maryann Phipps on occasion and then went to work at Holmes in Wellington, New Zealand up until late 2008. Her next venture would continue to narrow her path on the way to founding Jumpstart.

In 2009, Kate began working with a non-profit focused on a globally consistent risk model for earthquakes that would come to be called the Global Earthquake Model (GEM). From 2009-2015, the primary focus was to leverage seismology to explain to insurance companies the need for widely accessible earthquake data. With Ross Stein, Anselm Smolka, and a team of brilliant engineers, they focused on a non-profit solution which would predict downtime, dollars, and death from earthquakes anywhere on the planet. The end result was an open-source, high level tool which could be used to evaluate the resilience of a large area.

During her time at GEM, Kate also served on SEAONC’s building ratings committee, which lead her to being a founding member of the United States Resiliency Council (USRC), an organization dedicated to rating buildings according to a series of performance metrics which go beyond the typical code-based approach.

In 2015, Kate was able to fully realize her goals of providing resilience in earthquake disasters to homeowners. She left GEM in the hands John Schneider and began pursuing the startup that would become Jumpstart. After her time spent researching disasters, she saw the Bay Area as the next New Orleans. This realization drove her to create the first financial instrument which would provide a lump sum cash payout to a private owner. For businesses, this is often called a catastrophe bond – an insurance device she studied under Dr. Dwight Jaffee while at U.C Berkeley.

Kate took the catastrophe bond model, her experience in building ratings, and her expertise in seismic events, and adapted it to support homeowners desiring to improve their own resiliency. The Jumpstart model is just that, a “jump start.” A payout which allows a homeowner to be more prepared to weather a disaster that hits close to home. Kate’s clear drive to value human life and welfare shines through each turn in her career.

When Kate is not pioneering the latest in financial assistance to homeowners, she spends time with her family enjoying life’s simple pleasures. You can find her riding around the Bay Area, up in the Oakland hills, where she currently resides.