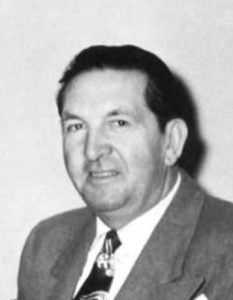 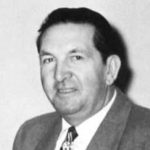 John Gould was born and educated as an engineer in Switzerland.  In 1923, he came to New York where he worked for about two years. In 1925, he moved to San Francisco and worked in the office of L.H. Nishkian.  During the Great Depression, he worked in the State Architect’s office. In 1935, John was appointed Chief Engineer for the San Francisco Bay Exposition Company developing Treasure Island for the World’s Fair of 1939.  While most of the exposition buildings were demolished when United States Navy which took over the island after the exposition, a few noteworthy concrete and steel hangers and buildings remained at the south end of the island.  In 1940, he opened his own firm of structural engineers in San Francisco. In 1945, he hired Henry Degenkolb and the firm eventually because Gould and Degenkolb, which is now is Degenkolb Engineers. Early firm clients included Woolworth (designing many stores in neighborhood shopping areas throughout the west), Pacific Telephone & Telegraph, Standard Oil and Bank of America.  Park Merced Tower in San Francisco was constructed in the late 1940’s.