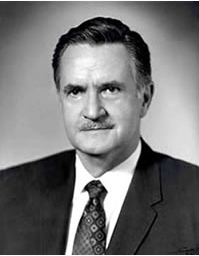 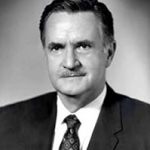 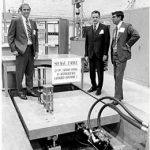 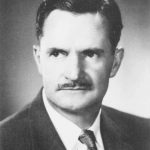 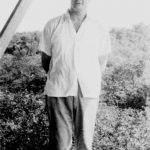 Known informally as the “Father of Earthquake Engineering,” John A. Blume’s influence on seismic engineering in the 20th century set the foundation for modern practice.  His contributions to the profession are insurmountable with over 150 papers, articles, and books published in his name.

Blume’s career began at Stanford University in 1929 as an undergraduate in Civil Engineering.  During his graduate studies, Blume created the second and most elaborate multi-story dynamic building model for shake table experiments.  The model was used for his joint thesis, “The Reconciliation of the Computed and Observed 10 Periods of Vibration of a Fifteen-Story Building,” which explored the combination of structural engineering and dynamics for earthquake engineering.  This connection between dynamics, inelastic design, and resisting seismic forces was revolutionary for his time and influenced the technical advancement of the profession. After finishing his Engineering Degree in 1935 at Stanford University, Blume began his professional career with the United States Coast and Geodetic Survey determining the natural periods of vibration, mode shapes, and damping of structures varying from the Alexander Building in San Francisco to the Searsville Dam in San Mateo County.  The testing was performed by a 300-pound machine invented by Blume himself at Stanford. After funding for testing waned at the Survey, he took a job as a field engineer for the construction of the San Francisco – Oakland Bay Bridge. His assignments included determining the correct final position for each of the strands in the main cables. After the bridge was completed, he worked for Standard Oil innovating seismic design for refinery equipment that was cost-effective. He then transferred to H.J. Brunnier Associates to work on military contracts during the World War II.  The tasks included designing bunkers surrounding the Golden Gate, Pearl Harbor improvements, and the Panama Canal docks. After the war was over in June of 1945, Blume started his own business.

While starting his own company, John became gradually more involved in Structural Engineers Association of Northern California (SEAONC), becoming president in 1948.  He then became president of the Structural Engineers Association of California (SEAOC) in 1949.  He was also a part of the committee which created the SEAOC Blue Book in 1959, specifically working on base shear and shear force distribution.  He was also a driving force for introducing ductile design into the modern codes.

Seeing the need to become familiar with the most recent earthquake engineering research, Blume returned to Stanford in 1964 for a doctorate degree.  He graduated in 1967 with the dissertation titled “The Dynamic Behavior of Multistory Buildings with Various Stiffness Characteristics.”

Blume participated in the San Francisco Seismic Investigation and Hazards Survey Advisory Committee (SIHSAC), formed by the city of San Francisco shortly after the 1971 San Fernando earthquake.  The committee created a parapet ordinance which required buildings to properly reinforce parapets with lateral force resistant detailing in 1975.  In 1978, Blume resigned from SIHSAC to become the president of Earthquake Engineering Research Institute (EERI), an organization formed from the Advisory Committee on Engineering Seismology (ACES) in 1949.  Blume had been the secretary of ACES and later became a founding member of EERI.

With the help of Stanford professors Jim Gere and Haresh Shah, Blume contributed funding and his expertise in earthquake engineering to create the John A. Blume Earthquake Engineering Center at Stanford University.  It’s inaugural symposium was held at Stanford on September 17, 1976. Over 450 engineers and scientists attended the all-day session and evening banquet program.  The Blume Center conducts research, provides instruction, publishes reports and articles, conducts seminars and conferences, and provides financial support for students.