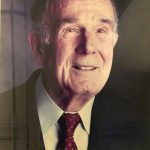 John Brisbin Rutherford, co-founder of Rutherford + Chekene, had a natural passion and curiosity for all aspects of structure and site engineering. Throughout his career, his knowledge of civil, structural, geotechnical, and marine engineering took him to sites around the world – from the California coast to the pyramids of Egypt and beyond. This respect and appreciation for the multi-disciplinary perspective, shared with his partner Constantine Chekene, was a likely cornerstone in the establishment of Rutherford + Chekene in 1960.

John grew up in Pennsylvania on his family’s dairy farm, which supplied milk to the Hershey Company. From the early age of nine, John knew he wanted to become an engineer. After serving in the military and receiving a Purple Heart for wounds from German machine-gun fire in World War II, he attended Lehigh University in Bethlehem, PA and graduated in 1949. The following year, he earned a master’s degree in civil engineering from Caltech.
John began his career working for the San Francisco Department of Public Works. Afterwards, he worked as a structural engineering consultant to Isadore Thompson, where he met Constantine Chekene, and as a Chief Structural Engineer at Fluor Corporation. Together, he and Constantine founded Rutherford + Chekene in 1960.

John was a truly diverse contributor to the Northern California engineering community. His interest in sitework and seawater impacts on buildings and building systems led him to earn licensure as a civil (1953), structural (1957), and geotechnical (1987) engineer. He has been described by many that knew him as, “an engineer’s engineer,” with a hands-on approach. Even well into his career, he would explore crawl spaces and wade into the ocean to assist with surveying. In his 60s, when brought on board for the design and construction of the new Monterey Bay Aquarium, John voluntarily trained to become a scuba diver so that he could perform his own dives to find the optimal underwater sites for anchoring the aquarium’s seawater intake system.

John was a proponent of using fundamental engineering principles to undertake and succeed at complex and novel engineering challenges. His approach to these new projects involved collaborative brainstorming, extensive research, and rigorous decision-making and application – a process he painstakingly documented along the way. Always interested in sharing the knowledge of what he learned, he would regularly present his work as case studies to R+C’s engineering staff.
Contributions

Throughout his time at R+C, John led many sizeable projects involving all phases of civil, structural, geotechnical, and marine engineering and spearheaded the expansion of R+C’s services to include Civil and Geotechnical Engineering. His interest and focus on projects along California’s coast allowed him to contribute not only to the Monterey Bay Aquarium, but also to the Cannery in San Francisco, UCSC’s Long Marine Laboratory, and the Monterey Bay Aquarium Research Institute.
John was passionate about ancient Egyptian architecture, building techniques, and artifacts. In various years from 1977 through 1993, he applied his engineering expertise to preserving structures and artifacts in Egypt’s Valley of the Kings. He served as a lead engineering consultant to the Brooklyn Museum’s Theban Royal Tomb Project at the Mut Temple site, the Metropolitan Museum’s El Lisht Expedition, and Pacific Lutheran University’s Valley of the Kings Project.

Beyond his contributions to engineering, John was personally involved in movements he believed would better society. He was active in Citizens for Fair Housing, the ACLU, the anti-war movement, and the Unitarian Church. In 1970, he ran as a Peace candidate for the California State Senate District 14.

From Monterey Bay to Egypt, John believed in bringing his hands-on approach, curiosity, and passion to preserving the treasures of the unique places where he lived and worked.