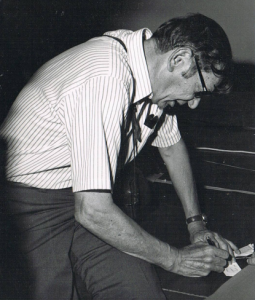 Isadore Thompson received his B.S. and M.S. in Civil Engineering from the California Institute of Technology.  Thompson started his career as an apprentice at various San Francisco consulting firms.  He later served as an Associate Structural Engineer for the State of California and was the Chief Design Engineer for the Pacific Bridge Company before establishing his own practice in 1944.  Thompson was an early pioneer in the San Francisco Bay Area in the design and construction of pre-cast concrete frames, shells, and barrel vaults.  As an expert in concrete structures, he presented a paper titled “Design, Construction and Erection Techniques for a Variety of Prefabricated Shells” at a Symposium organized by the International Association for Space and Spatial Structures (IASS) in Haifa, Israel, 1973.  In addition to the various reinforced concrete structures he designed throughout his career, Thompson also served as a lecturer in structural engineering at Stanford University.