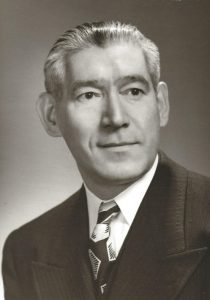 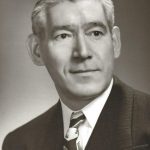 Henry C. Powers arrived in San Francisco from Fresno in the fall of 1915 to start his career in the building industry with the aim to eventually become a structural engineer.

Despite not having a college degree, he obtained employment with the firm of Badt & Fisher Consulting Engineers and stayed with them until April 1, 1917 when he was hired by H. J. Brunnier, Consulting Structural Engineer, with whom he would remain associated for the next fifty years (except for a stint in the Army Corp of Engineers in 1918 near the end of World War I). In 1924, he was promoted to Engineer-in-Charge, the title he held for the rest of his career, overseeing the engineering design and business operation of the firm as it became one of the most prominent in California history. When firm founder Brunnier stepped aside in 1963, Henry Powers became the first President of H.J. Brunnier Associates. He held California Civil Engineer license number 39 and was also licensed to use the title Structural Engineer in the State of California.

Powers himself categorized his lengthy project list into three eras. First in the years between World War I and World War II which included design of the high rise Russ Building, Hunter Dulin Building and Shell Building.

The second occurred during World War II where the firm designed military installations at Mare Island and Benicia, Engineer Depot at Lathrop, Quarter Master Depot at Tracy, McClellan Field at Sacramento and the Signal Depot at Sacramento.

In 1942, Powers was selected and served as President of the Structural Engineers Association of Northern California and later recognized as an Honorary Member of the organization. He was a member of the Consulting Engineers Association of California and a charter member of the Earthquake Engineering Research Institute. In 1951, he served on the American Society of Civil Engineers (ASCE) Committee that developed the document Separate 66 titled “Lateral Forces of Earthquake and Wind,” the first of its kind. He was a longtime member of the San Francisco Rotary Club with the classification of Structural Engineering. He was a devoted member and active participant in the affairs of the Building Industry Conference Board since its conception and served as its Chairman during the formative years of the organization.