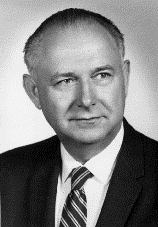 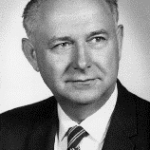 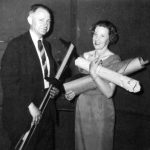 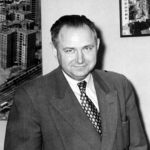 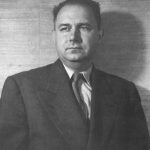 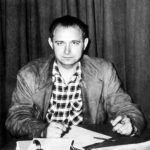 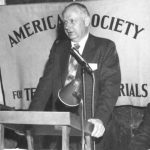 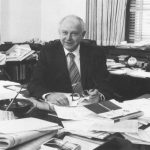 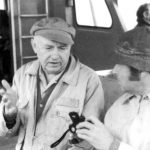 Henry Degenkolb was a well decorated and extremely innovative structural engineer. After graduating in 1936 with a M.S. in engineering from the University of California, Berkeley, he spent three years designing heavy timber structures on Treasure Island for the 1938 World’s Fair. In 1940, as these buildings were being demolished for the conversion of Treasure Island for a naval base, Henry was hired to experimentally test the large timber connections he and others had designed without sounds knowledge of how multiple bolts share loads in large connections. The test program was funded by contributions from local engineers. Henry spent about three years as Chief Engineer for Summerbell Structures designing bow-string trusses and all kinds of timber structures. He was an authority on timber design and detailing. In 1946, he joined the firm of John Gould and became Chief Engineer. The firm became Gould & Degenkolb, then H.J. Degenkolb and Associates and eventually Degenkolb Engineers.

Henry was known for many innovative structural designs. In the 1940’s, he designed the mid-rise Park Merced Tower buildings of concrete with pierced shear wall exteriors. He designed numerous equipment buildings for the Pacific Telephone changing their low-rise buildings to stout concrete structures. He designed numerous parking structures such as St. Mary’s Square, 5th and Mission, Portsmouth Square, Civic Center, Sutter Stockton and the San Francisco Airport as sound structures with comfortable ramps and access. He designed several high-rise buildings, including the International Building at 601 California Street and the Bank of California Building at 400 California Street, both dual systems with structural steel moment frames and concrete shear wall cores. He was also a consultant to numerous clients including Bay Area Rapid Transit (BART) and the University of California.

Henry believed in chasing earthquakes to learn what structures and details performed well and which failed. He visited Alaska in 1964, Caracas in 1967, San Fernando in 1971, Managua in 1972, Guatemala in 1976 and others. He wrote many articles and shared his observations with the Structural Engineers Association of Northern California (SEAONC) membership.

Henry was also active in code development. He was a primary author of the American Society of Civil Engineers (ASCE) paper Separate 66 in 1951, which would be the precursor to the first Structural Engineers Association of California (SEAOC) Blue Book in 1959. He was Chair of the Design Committee of Applied Technology Council’s ATC-3 in the 1970’s, which expanded the seismic code approach with the introduction of the response reduction factors (R-Factors). He later served on the American Institute of Steel Construction (AISC) Specification Committee writing the national structural steel code. He served as President of SEAONC, SEAOC, ASCE San Francisco Section, and Earthquake Engineering Research Institute (EERI). His innovations sparked the concept of the eccentric braced steel frame system, which subsequent research justified as a valid seismic resisting system. For more information in his own words, see his EERI Oral History.