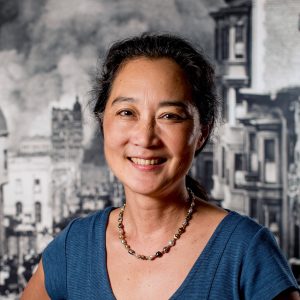 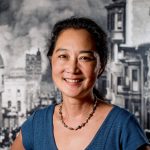 Grace Kang is a structural engineer, known both for her engineering practice as well as her involvement with researchers, collaborating with a wide range of organizations in the field of earthquake engineering.

Grace was born in Illinois, and was raised in Oakland, California, where she attended Oakland High School. She remembers growing up in a “maker” household – watching her father frequently fix or build things around the house and seeing her mother reupholster furniture, make ceramic art and sew couture clothing. During her undergraduate studies at the University of Calfiornia, Berkeley, Grace got her first real-world civil engineering exposure while interning for two summers at Bechtel (where her father worked as an electrical engineer). After graduating from UC Berkeley in 1981 with a B.S. in Civil Engineering, Grace worked at GFDS Engineers for four years where she was mentored by Russell Fudge, Karl Kaspin, Bob Forsberg, Ed Diekmann, and Otto Avvakumovits. After returning to UC Berkeley and earning her M.Eng. in Structural Engineering in 1987, she worked briefly at Robinson Meier Juilly & Associates before starting a 26-year career working at Forell/Elsesser Engineers, where she was mentored by Nick Forell and Eric Elsesser, and eventually became a Principal/Owner of the firm with David Friedman, Jim Guthrie, Simin Naaseh, Mason Walters, Mark Jokerst, and Paul Rodler. She subsequently co-authored Eric Elsesser’s Oral History with Chris Arnold and Bob Reitherman for the Earthquake Engineering Research Institute’s (EERI) Oral History Series.

Grace’s most memorable projects at Forell/Elsesser include the seismic upgrade of the PG&E Headquarters complex in downtown San Francisco, the Maximo Martinez Commons housing facility at UC Berkeley, the temporary seismic upgrade of the Berkeley Art Museum and Pacific Film Archive building (originally designed by Mario Ciampi), and the seismic upgrade and vertical addition of the Porter College Residence Hall B at UC Santa Cruz – serving as the prime consultant and project manager for the last two mentioned projects. In addition to extensive experience with seismic design and seismic retrofits of buildings, Grace was a pioneer in helping clients understand the need for appropriate seismic bracing of MEP components serving critical functions in the 1990’s/2000’s, particularly on her various non-hospital upgrade projects.

In 2005, Grace and Alan Kren were co-chairs of the SEAONC Sustainable Design Committee, the first in the SEA organization. After serving on the SEAONC board of directors from 2006 to 2008, Grace was elected President of SEAONC in 2012-2013, becoming the fourth woman and first person of Asian descent to fill that position. As SEAONC president, she was a vocal supporter of the San Francisco Soft-Story Ordinance and worked closely with San Francisco’s Director of Earthquake Safety, Patrick Otellini, and other community organizations to get it passed in 2013.  Grace collaborated with the leadership of SEAOSC as co-chair of the organizing committee for the “Buildings at Risk – Earthquake Loss Reduction Summit” which was held in both Los Angeles and San Francisco in 2013. Grace also served on the SEAOC Board of Directors from 2011 to 2014, and on the Cal Poly SLO ARCE Department Advisory Board from 2006 to 2013.

In 2014 Grace joined the Pacific Earthquake Engineering Research Center (PEER) as Communications Director, working with Stephen Mahin who was the Director and also her former graduate school advisor. In the aftermath of the 2014 South Napa Earthquake, Grace coordinated a wide range of academic researchers to contribute to a PEER Report (No. 2014/13), which presented preliminary notes and observations of the earthquake. The report was published within a month after the earthquake (which was very fast at that time).

In addition to her communcations role at PEER, Grace was project coordinator for a PEER coordinated research project ”Quantifying the Performance of Retrofit of Cripple Walls and Sill Anchorage in Single-Family Wood-Frame Buildings,” funded by the California Earthquake Authority.  The large project team included practicing engineers as well as academic researchers.

While at PEER, Grace has collaborated with other organizations including:

Grace continues to pursue activities that focus on improving the quality of our built environment in regions subjected to natural hazards. She is particularly interested in a multi-disciplinary approach to problem-solving and the interactions of systems and the community at large, with an emphasis on sustainability and resilience.