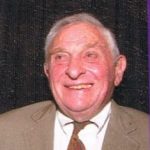 Ephraim Gordon Hirsch, known as “Eph”, a native San Franciscan, attended the University of California, Berkeley, where he received the degrees of Bachelor of Science in 1953 and Master of Science in 1955.  His MS thesis, done under the tutelage of Professor Egor Popov, was “The Deflection Theory of Arches” using finite differences analysis which matched the physical model testing performed by Professor Carl Monismith.  His education continued in 1959-60 by earning a Fulbright Scholarship to Rome to study under Pier Luigi Nervi, as well as to attend architectural seminars organized by the architectural historian and critic Bruno Zevi.

Eph’s professional employment began with Isadore Thompson in 1955 where he designed the precast ribbed triangular roof panels for the San Francisco ILWU Hiring Hall.  In 1956-57, he was involved with the design of new buildings and the repair of typhoon damaged structures on Okinawa during his military service with the Army Corps of Engineers.  He resumed his work with Thompson in 1958, where he worked on the design of long span pre-cast thin shell barrel vaults and pre-cast rigid frames.  After a hiatus due to the aforementioned Fulbright study year, Eph was employed in New York City by Ammann & Whitney where he met and worked under the direction Herbert Rothman who years later was to become the designer of the new San Francisco Bay Self Anchored Suspension Bridge. Eph moved back to San Francisco in 1962 where he worked as project engineer for Chin & Hensolt on the University of California Hildebrand Hall. In 1963 he joined Eric Elsesser in practice for 2 years.  In 1964 he established his consulting engineering practice. In 1968 this became a partnership, Hirsch & Gray, with his UC class-mate Ralph G. “Gary” Gray.  Upon amicable dissolution of the partnership in 1975 he continued in private practice, (dba) E.G.Hirsch & Associates, until gradual retirement in 2018.

In his over 50 years of private practice his work product included reinforced concrete design, including early examples of ductile concrete moment frames; steel space trusses; and heavy timber construction. In addition to creative technical design, his work always endeavored as much as possible to enhance the exposed structural expression and design of the project’s architecture. Many of these major institutional and civic projects can be seen highlighted below.

In non-design roles he performed seismic evaluation studies of San Francisco branch libraries, Berkeley High School buildings, and Wurster Hall, as well as post-Loma Prieta building damage assessments. He was on the Cal Trans Peer Review Panel for seismic evaluations of Loma Prieta Earthquake freeway damaged structures. He was a member of the Caltrans Engineering Design Advisory Panel (EDAP) which chose the new East Bay span replacement for the steel cantilever through truss San Francisco-Oakland Bay Bridge, the Self Anchored Suspension Span for which he was a strong advocate.

In addition to his private design and consulting practice his public policy contributions included serving on many boards, commissions, and public entities such as BCDC Design Review board, Citizens Advisory Panel for the Octavia Boulevard Central Freeway replacement, Bay Area Regional Earthquake Preparedness Project, San Francisco Building Inspection Commission. For many years he taught a structural design course to architectural students at the U. C. Berkeley College of Environmental Design, and in later years was involved with the Engineers Alliance for the Arts Student Impact Project for high school students.