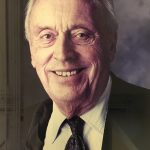 A co-founder of Rutherford + Chekene, Constantine Chekene’s career was an outgrowth of his personal values: nurturing and educating others, promoting equity and opportunity, and applying a holistic approach to the engineering practice. With his charismatic and commanding presence, Constantine had the ability to capture the attention of a room, win the trust of clients, and inspire employees. His legacy can still be felt today at Rutherford + Chekene and in the many buildings the firm has designed and revitalized throughout California and beyond since its founding in 1960.

Constantine was born in Moscow in 1916. At the age of one, while his family was traveling in China, the Bolshevik Revolution began. This event would change the course of Constantine’s childhood and his life. Constantine remained in China with his mother while his father returned to Russia to serve in the czar’s military. His father was known to have survived the revolution, but was never seen by the family again. Constantine grew up in the established Russian community in Harbin, China, and went on to attend and graduate from a polytechnic university there in 1937. He then lived in Shanghai, married, and moved to San Francisco in 1949.

Though Constantine trained as a mechanical engineer, his first job in San Francisco was as a structural drafter, a position where his lettering skill and style were highly valued. During his time as a structural drafter, Chekene taught himself structural engineering and earned his civil licensure in 1955 and his structural licensure in 1958. Over the years, he developed and became known for his proactive and collaborative approach to dealing with city plan reviewers and obtaining efficient approvals. His early employers included Reid and Tarics Associates and Isadore Thompson. While working for Isadore Thompson, Constantine crossed paths with many renowned engineers including Nick Forell and Ruth Gordon; there, he also met John Rutherford. Together in 1960, they formed Rutherford + Chekene.

With his diverse exposure and training, Constantine understood the interrelationship between the many components of a building, not limiting his focus to structural systems. This earned him the trust of the architects he worked with—including Joseph Esherick and Associates, Timothy Pflueger Architects, and Stone Marraccini Patterson (SMP) – all of whom came to rely on him to help them develop effective and constructable solutions. With his attention to interdisciplinary design, Constantine was also instrumental in the firm’s entry into the healthcare sector for R+C, beginning with the VA hospital system. This type of work would become a mainstay of R+C’s practice. He was known to say, “Whatever you do, do it well.”
As the director of Rutherford + Chekene from 1967–1974, then as its president from 1975 until his retirement in 1983, Constantine valued and spent time nurturing younger engineers and involving staff at all levels in leading the firm. A forward thinker and a people-person, he paved the way for the firm’s young engineers to become shareholders in the growing company, earning their trust and their loyalty for years to come.

Other Contributions to the San Francisco Community

In addition to his professional contributions, Constantine was actively involved in his San Francisco home and church community. He helped lead the construction of the Christ the Saviour Church on 12th Avenue and the renovation of the historic bell tower at the Holy Trinity Cathedral on Green Street and Van Ness. In 1973, he assisted in the re-establishment of the Russian-English Parish school at his church, Christ the Saviour, where he then taught Russian history.
Constantine Chekene continued to emphasize growth, education, and relationships in his professional and his personal life. His legacy is seen not only in the structural engineering industry, but also in San Francisco’s Russian community.