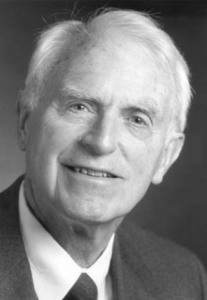 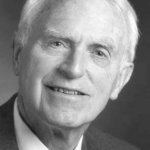 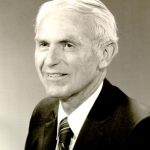 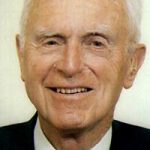 Ben C. Gerwick began his career with an undergraduate degree in Civil Engineering from the University of California, Berkeley in 1940.  After graduation, he served in the United States Navy for six years and became a Commander of the attach transport U.S.S. Scania.  Gerwick returned to the United States and began working at his father’s company, Ben C. Gerwick, Inc. He converted the company’s existing precast concrete plant into a facility capable of producing a structural components using a new technology, pretensioned concrete. The company later produced prestressed concrete piles, bridge girders, tunnel liners, and railroad ties.  The technology was used to construct the overwater extension at La Guardia Airport in New York. The tunnel liners were used for the construction of Channel tunnel and the South Bay Outfall Tunnel. Match-cast segmental prestressed precast bridge piers were used for the Columbia River Bridge I-205.  This method of bridge girder construction is now accepted and used frequently. He is also known for his role in the development of the slurry wall construction system with soldier beams which was used for the deep foundations of the San Francisco BART system and the San Francisco Muni Turnaround. He also assisted in the design and construction of cofferdams for the bridge pier construction of Second Delaware Memorial bridge and the Bisan Seto Bridge Anchorage. He developed bridge pier construction methods from prefabricated concrete shells and tremie concrete, which were used for the Richmond-San Rafael Bridge, the San Mateo-Hayward Bridge, the Columbia River Bridge, and the Great Belt Link in Denmark. His marine design and construction experience includes work on the existing floating bridges in Washington State including the Hood Canal, I-90, and Evergreen Point.

Ben was an active member of the Prestressed Concrete Institute (PCI), serving as president in 1957.  He also served as the President of the International Federation of Prestressing. Ben was responsible for international construction following the merger between Ben C. Gerwick, Inc. and J.H. Pomeroy.

In 1971, he became a faculty member at UC Berkeley while starting a specialized consulting engineering company under his father’s former company’s name.  He has authored over 200 technical papers and several books including Construction of Presstressed Concrete Structures, Construction of Marine and Offshore Structures, and The Bridge Beyond.