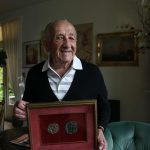 Dr. Alexander Tarics, a Hungarian engineer who emigrated to the U.S., was an innovator first in the swimming pool and later in the design of earthquake-resistant buildings. Dr. Tarics was a member of the Hungarian water polo team that defeated Germany to win gold medals at the 1936 Olympic Games in Berlin. He improved his game by training himself to shoot with either hand.

Sandor Gyula Tarics, who changed his first name after moving to the U.S., was born Sept. 23, 1913, in Budapest, Hungary His father, a carpenter, died of tuberculosis contracted during World War I. His mother was a seamstress. The younger Mr. Tarics grew to only about 5-foot-8 but aspired to play top-level water polo, generally a game for larger men. A right-hander, he threw balls and did daily tasks with his left hand to make himself virtually ambidextrous, allowing him to outfox opponents by throwing with either hand. “I knew I was not strong enough,” he told the San Francisco Chronicle in 1998, “and I was only an average swimmer, so I had to do something other people did not do.”

The peak of his water polo career came in 1939, when he scored seven goals as Hungary defeated Germany at the 1939 World University games. As an impoverished engineering student in Hungary, at one point he tried to pawn his gold medal but was informed it wasn’t made of gold. Near the end of World War II, amid house-to-house fighting in Budapest, his medal was lost when the building where he lived was destroyed. He later found it in the rubble and had it framed.

He earned a doctorate in civil engineering from the Joseph Nador Technical Institute in Budapest and made his first trip to the U.S. in 1941 for an engineering fellowship at Harvard University. In 1948, he emigrated to the U.S., where he initially taught civil engineering at the Indiana Institute of Technology in Fort Wayne. Two years later he moved to the San Francisco area and eventually led his Architectural Engineering firm, Reid & Tarics Associates.

He also taught a engineering course at Berkeley in the 1970s, where he met James Kelly, then a junior professor of civil engineering. Professor Kelly described work he was doing at the university’s laboratories to test seismic isolation, in which large rubber blocks, reinforced with steel, are placed underneath the building to absorb displacement, ground motion, during earthquakes. “I think I could use that,” Prof. Kelly recalled Dr. Tarics saying after he witnessed shake table tests and reduction of building displacement.

After resettling in the U.S., Dr. Tarics used novel technology in the mid-1980s to put rubber shock absorbers under a county court building in Rancho Cucamonga, California. Dr. Tarics worked with James Kelly, an engineering professor at the University of California, Berkeley, on the project. In 1976, JM Kelly in association with CJ Derham from MRPRA began working on the development of natural rubber bearings for the seismic protection of building and bridges.

Over a period of about 5 years, this collaboration led to a series of experimental tests, both at the component level and on entire isolated structures on the shaking table of the Earthquake Engineering Research Center (EERC) at UC Berkeley. The results from these early tests were very promising and led to the first base‐isolated building in the United States, the Foothill Communities Law and Justice Center (FCLJC), which was also the first building in the world to use isolation bearings made from high‐damping natural rubber developed for this project by MRPRA. In the early 1980’s, when Dr. Tarics was providing Structure Engineering for construction of a new court building in Rancho Cucamonga, he persuaded San Bernardino county officials to try seismic isolation. Prof. Kelly said, “Alex’s persuasiveness got this thing going.”